Source: Notes on Arab Orthodoxy
Many are those, clergymen and politicians, who claim to speak in the name of the Christians. Many are those who want to boast in the Christians' numbers and not boast in Christianity. What a difference there is between those two things!
Fr. Georges Massouh | 26 May 2020 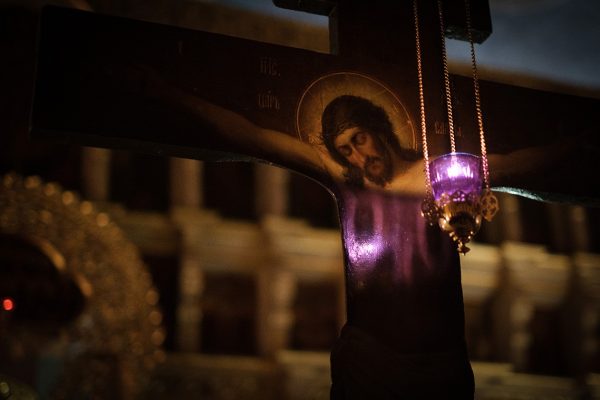 In his Epistle to the Galatians, the Apostle Paul mentions two currents that tug at Christians when he makes a distinction between those who boast in the flesh and those who boast in the cross: “For not even those who are circumcised keep the law, but they desire to have you circumcised that they may boast in your flesh. But God forbid that I should boast except in the cross of our Lord Jesus Christ… for I bear in my body the marks of the Lord Jesus” (Galatians 6:13-14, 17). Christianity, according to the Apostle Paul, is not measured by the number of those belonging to it through baptism, but by the number of those who bear in their bodies the marks of the Lord Jesus. Therefore the Apostle warns Christians about falling into playing a numbers game, as Christianity has a qualitative value, not a quantity of  bodies that can be enumerated. Thus we realize why Christ did not call Christians to brag about their numbers, but rather spoke about the “little flock”, calling on it to not fear the world.

The Apostle Paul warns Christians not to fall into the trap of those who are only concerned with boasting about their numbers. He speaks clearly about those who “do not keep the Law” but despite this want Christians to practice the Law so that they can boast in their numbers. He once again points out that the true Christian is not the one who has only performed the Law, but the one who bears the cross without interruption, the one for whom the cross has become a part of his body.

The Apostle Paul did not boast of the number of those who were baptized at his hand, although they were many. Instead, he reminds his audience that the sole thing that causes him to boast is “the cross of our Lord Jesus Christ.” For Paul, what is meant by the cross is not an object made of gold, silver or wood… but rather the heavenly things that the cross symbolizes, chief of which are love, martyrdom, self-sacrifice and unlimited giving…

Paul closes his discourse about the cross by eloquently pointing out that he himself bears “the marks of the Lord Jesus” in his body. By mentioning this, he means to once more recall the words of the Lord Jesus: “Whoever desires to come after Me, let him deny himself, and take up his cross, and follow Me” (Mark 8:34). No one can be a disciple of Jesus if he does not deny himself. The precondition for speaking in the name of Jesus is that a person must renounce himself and his deadly ego. The true disciple of Jesus is the one who crucifies himself for the sake of the world, not the one who wants to crucify the world for the sake of pleasing himself and his lusts.

Those living saints are not concerned with what religious leaders or political leaders say and they are not concerned with demanding “the rights of Christians” and their shares of corruption, deals and appointments… This is because they have realized that the Christians’ true weight is not defined by the weight of the blood, flesh and bones of their bodies, but rather by the love that they bear in their hearts toward their brothers in faith, citizenship and humanity. No one can claim to speak in the name of true Christians. Truth alone speaks in their name.

The entirety of what concerns these saints is that they have born the cross and that they have loved to the end.  They wait with a true longing for martyrdom. Anything else is worthless.

Most viewed articles
Metropolitan Hilarion of Eastern America and New York to Be Buried in Jordanville on May 22222
Patriarch Kirill: The Peoples of Russia and Ukraine Have No Interest in the Conflict186
Communion restored between the Serbian Orthodox Church and the Macedonian Orthodox Church – Ohrid Archbishopric133
Metropolitan Hilarion of Eastern America and New York Reposes in the Lord130
What Do We Celebrate at Mid-Pentecost?111
Family Life and Spiritual Warfare75
Celebrating 100 Years with Paschal Joy71
Patriarch of Serbia to Concelebrate with Archbishop Stephen of Ohrid50
Concelebration of Divine Liturgy by the Serbian Patriarch and Archbishop of Ohrid in Belgrade (VIDEO)46
China’s Internet Clampdown Is Step Closer to ‘Cancelling Christianity’41
Most popular authors
Pravmir.com team767
Ioannis Foundoulis111
Archpriest Michael Gillis75
Priest Luke A. Veronis71
Donna Birrell41