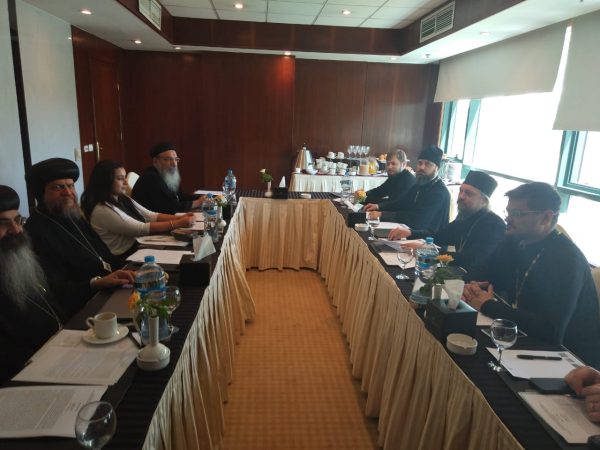 On 27-31 May 2019, the Commission for Dialogue between the Russian Orthodox Church and the Coptic Church held its 3rd session.

The delegation of the Moscow Patriarchate included Bishop Gennady of Kaskelen – co-chairman of the Commission; Hieromonk Stefan (Igumnov), secretary for inter-Christian relations of the Moscow Patriarchate’s Department for External Church Relations (DECR); Rev. Viktor Kulaga, representative of the Patriarch of Moscow and All Russia to the Patriarch of Alexandria and All Africa; Deacon Ilya Kashitsyn, DECR staff member; and Mr. Sergei Alfyorov, DECR staff member and co-secretary of the Commission. The Coptic Church was represented by Bishop Serapion of Los Angeles, co-chairman of the Commission; Bishop Youlios, General Bishop for Public, Ecumenical and Social Services; Bishop Kyrillos, Auxiliary Bishop of Christian Education in the Diocese of Los Angeles and Dean of Ss Athanasius and Cyril Coptic Orthodox Theological School; Rev. Boulos Halem, Coptic Orthodox spokesmen; Dr. Isaak Ibrahim Agpan, General Secretary of the Istitute of Coptic Studies; and Mrs. Barbara Soliman, Director of the Papal Office for Projects and Relations and co-secretary of the Commission.

The Commission discussed the implementation of agreements reached at the session held in Astana on 27-29 June 2017 and defined programme of bilateral cooperation that will be presented to the church authorities for approval.

The participants noted with satisfaction successful development of contacts between Russian and Coptic monks; mutual visits of the delegations of hegumens and brethrens were conducive to it. Last visit was paid by the delegation of the Russian Orthodox Church to Egypt on 6-12 November 2018. Annual visits are planned. Also discussed were plans of the implementation of pilgrimages.

A priority goal of the Commission was cooperation in the field of information realm initiated on the results of the working visit to Cyprus of the delegation of the Department for Church’s relations with society and mass media that took place on 26-28 November 2017. A reciprocal visit of representatives of the Coptic Church is expected. Last year, staff of the ‘Neofit’ documentary studio and a shooting team of ‘Spas’ TV channel visited Egypt several times. They visited ancient Coptic churches and monasteries, places where the Holy Family stayed and interviewed hierarchs of the Coptic Church and common Egyptian Christians. The material will be used in a documentary named ‘The Earthly Life of the Theotokos’ shown on the federal channel ‘TB Centre’ on April7. A documentary of Coptic Christianity and the Coptic Church and a television series about common Christian values in Egypt will be released this year.

Fruitful cooperation in academic sphere was noted. A delegation of the Moscow theological academy headed by its rector Archbishop Amvrosy of Vereya visited Egypt on 6-13 May. Many important meeting were held during the visit, including a round table on the development of cooperation in academic sphere. Projects were outlined of the exchange of lecturers, participation in conference and cooperation between libraries and schools of church choirmasters and icon-painters. Practice of students exchange should be put on a higher level. At present Coptic students can study at the theological schools of the Russian Orthodox Church and the leading Russian educational institutions in the framework of a Russian Federation’s special educational quota for the citizens of Egypt. This agreement was reached at the meeting of His Holiness Patriarch Kirill of Moscow and All Russia and Patriarch Tawadros II of the Coptic Church with Russian President Vladimir Putin on 24 May 2017 in Moscow. A two-week summer institute for young clergymen and students of the Coptic Church will take place in Russia in 2010. The programme will include visits to the Synodal departments of the Moscow Patriarchate and sightseeing of religious, historical and cultural sites of our country.

Continuation of inter-church cooperation in the solution of topical problems of the legal status of the Coptic community living in the Moscow region and pastoral care for it were considered important. Patriarch Tawadros II has blessed Bishop Theodosius of Giza, who visited Russia with working visits in May and August 2018, to be in charge of this work.

Joint theological consultations that would promote dialogue between the Orthodox Church and the family of the Ancient Oriental Churches are an important part of bilateral relations. Plans of the 2020 meeting of theologians were discussed.

Coordination of inter-church cooperation in supporting the suffering Christians in the Middle East region is a topical aspect of bilateral cooperation. Highly appreciated was the initiative of His Holiness Patriarch Kirill of Moscow and All Russia to hold consultation with Christian leaders of the world, including Patriarch Tawadros II, for finding a common response to the aggravation of the situation in Syria in April 2018. Another important event in this sphere was the meeting of the heads and representatives of the Oriental Churches on the situation of Christians in the Middle East held on the initiative of the Holy See in Bari on 7 July 2018. Among those taking part in the meeting were Patriarch Tawadros II, Primate of the Coptic Church, and Metropolitan Hilarion of Volokolamsk, chairman of the Moscow Patriarchate’s Department for External Church Relations.

Also discussed at the session were other topical issues of mutual interest, including a possibility of common work at the inter-religious meetings and coordination of multidisciplinary cooperation between diaspora communities of both Churches.

The participants in the session adopted a communiqué.

Patriarch Tawadros II highly appreciated the Commission’s work and the ‘dynamic development of bilateral relations, which are ’bringing bright witness of the indelible Gospel values to the world. At this difficult time we must build bridges of friendship, widen and strengthen relations between our nations and – what is even more important – to pray for one another and for the God-commanded Christian unity’ he said.

During their stay in Egypt members of the Moscow Patriarchate delegation visited the Cathedral of St. Mark in Cairo and abodes in the Nitrian Desert founded in the 4th-5th centuries, including monasteries of St. Paisios the Great and St. Macarius the Great.

The next session of the Commission will be hosted by the Russian Orthodox Church in 2021.