His Holiness Patriarch Kirill receives delegation of the Coptic Church

Source: DECR
Natalya Mihailova | 20 June 2017
On June 18, 2017, His Holiness Patriarch Kirill of Moscow and All Russia met with the delegation of the monks of the Coptic Church at the Red Hall of the Cathedral of Christ the Saviour. 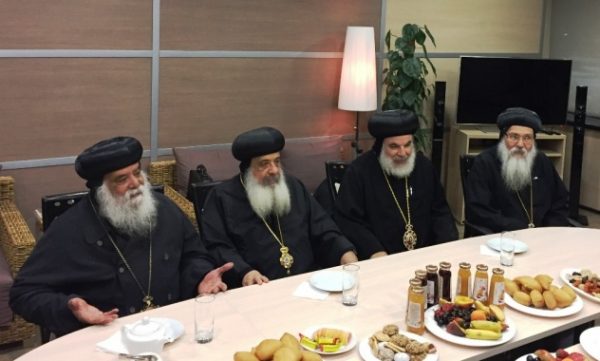 The delegation will make a pilgrimage to the Orthodox monasteries of Russia in compliance with the decision of His Holiness Patriarch Kirill of Moscow and All Russia and His Holiness Tawadros II, Pope of Alexandria and Patriarch of the Holy See of St. Mark. This is a return visit: a delegation of the Russian Orthodox Church made a pilgrimage to the Christian holy sites in Egypt in November 2016.

The programme of the pilgrimage of the representatives of the Coptic Church includes visits to the cathedrals of the Moscow Kremlin, the Laura of the Holy Trinity and St. Sergius, the Danilov, Novospassky, Sretensky, Donskoy stavropegic and some other monasteries.

On June 18 the delegation attended the Divine service at the Cathedral of Christ the Saviour.

Attending the meeting with Patriarch Kirill were Archbishop Feognost of Sergiev Posad, chairman of the Synodal department for monasteries and monasticism; Bishop Paramon of Bronnitsy, administrator of the North and Northwestern vicariates of Moscow; and hieromonk Stefan (Igumnov), secretary for inter-Christian relations of the Moscow Patriarchate’s Department for External Church Relations.

His Holiness Patriarch Kirill greeted members of the delegation, saying that their visit was a great joy.

“I assess positively the development of relations between our Churches,” he added.

The Primate of the Russian Orthodox Church visited Egypt in April 2010 and met with the then Pope and Patriarch Shenouda III whom he had known for many years. His Holiness Patriarch Kirill met with Pope and Patriarch Tawadros II several times. Their last meeting took place at the Patriarchal working residence less than a month ago. The Primates of the two Churches talked with Russian President Vladimir Putin.

“I am grateful to you for hospitality rendered to the group of our monks who visited your monasteries in compliance with the decision taken at my meeting with Pope Tawadros II due to the necessity of developing and deepening our bilateral relations. We have given a new impetus to the development of relations between our Churches in various fields.

“You know that a particle of relics of St. Nicholas has been brought to Moscow. Maybe you have seen people standing in long line to venerate the relics. After the visit of the group of our monks to Egypt I had an idea which I want to share with you. I mean the bringing of relics of a founder of Egyptian monasticism to Russia. We talked about it with Patriarch Tawadros, and he promised to see into the matter.”

His Holiness spoke also about confession and martyrdom in the Coptic Church:

“Our brothers and sisters, members of your Church, are perishing. Churches in Tanta and Alexandria were bombed; the most dreadful terrorist attack in Minya left hundreds killed; many of the victims were children.

The Primate of the Russian Church is convinced that ignorance is the background. “Perpetrators of terrorist attacks appeal to religious feelings of Muslims who are dissatisfied with the secular godless standard being thrust upon them, but they link the spreading of godlessness and secularism with Christians and accuse them, saying that modern godless civilization has come out from Christian civilization. That is why the image of Christianity is distorted.

“The participation of the West in military actions on the territory of Muslim states is taken as a crusade. We need direct contacts with Muslim clergy and Muslim thinkers in order to dispel these prejudices and wrong opinions so that they understand that Christianity was the first victim of secularism.”

His Holiness added that the Christian Church had suffered because of the revolutions in Europe, and godlessness id being spread as part of the struggle of secular forces against Christianity.

His Holiness believes that relations of the Coptic Church with Islam in Egypt are very important since their development will tell on the development of relations between Christians and Muslims throughout the world.

Bishop Daniel, head of the delegation, introduced its members to Patriarch Kirill and expressed gratitude to His Holiness for reception and an opportunity to visit the holy sites of the Russian Orthodox Church. He said:

“Our monks and our people like to visit the holy places in Russia. They know about many Russian saints, especially about St. Seraphim of Sarov.”

“Thanks to our pilgrimage we can feel that monks in the Russian and Coptic Churches have common ideals and principles. You, Your Holiness, have opened doors to the exchange of spiritual experience.”

“Your heart is open to the whole world. We know how grave your responsibilities are and pray to God to grant You many years of life and wisdom for guiding your great Church.

“We want to invite You to Egypt to visit our deserts and monasteries. Our Patriarch Tawadros II says many kind words about You and thanks You for your labors,” the head of the Coptic delegation said in conclusion.