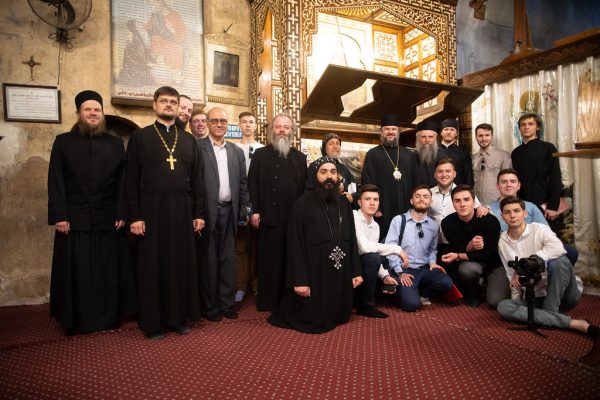 From May 6 to 13, 2019, with the blessing of His Holiness Kirill, Patriarch of Moscow and All Russia and on the invitation of Coptic Patriarch Tawadros II, a delegation of the faculty, staff and students of Moscow Theological Academy visited Egypt to help develop inter-church cooperation in academic sphere and make a pilgrimage to old common Christian shrines in Egypt.

The trip took place in the context of developing dialogue between the Russian Orthodox Church and the Coptic Church and as part of the work of the respective bilateral Commission.

During its trip the Moscow Patriarchate delegation visited the IV-V century monasteries of the Romans (Al-Baramus), the Syrians (As-Suriani), St. Paisius the Great (Anba Bishoy), St. Macarius the Great (Anba Makarios), and monasteries of St. Anthony the Great and St. Paul of Thebes of the Eastern (Arabian) Desert. In these old monasteries the guests from Russia had talks with their monks and venerated the great shrines associated with the history of the emergence of Christian monasticism. In Cairo, the delegation visited the historic Christian center of the city, as well as convents of St. George the Conqueror (Mar Girgis), St. Theodore Stratelates (Amir Tadrus), the Coptic Hanging Church (Muallaqa­), the Ss Sergius and Bacchus with its crypt grotto, which is believed to give refuge to the Holy Family; as well as the churches of St. George the Conqueror, the Cathedral of St. Mark and the church of St. Paul.

On May 10, the delegation visited the Coptic Church Seminary and the Institute of Coptic Studies. Then a round-table conference took place, devoted to prospects for further development of cooperation in the academic sphere between the Russian Orthodox Church and the Coptic Church. The sides negotiated a series of joint proposals to be presented to the bilateral Commission for Dialogue and to the supreme church authorities for approval.

On May 12, Archbishop Ambrose and Hieromonk Stephen (Igumnnov) visited Alexandria, where they received a warm welcome from His Beatitude Theodoros II of Alexandria and All Africa. Present at the meeting was Father Victor Kulaga, representative of the Patriarch of Moscow and All Russia to the Patriarch of Alexandria and All Africa, and Hieromonk Daud al-Anthony (Coptic Church), from the St. Anthony the Great Monastery. The guests prayed together with His Beatitude at the St. Mark Church of the Monastery of St. Savvas. They visited the St. Mark Church and the Cathedral of the Annunciation of the Most Holy Mother of God with its residence of the Patriarchs of Alexandria.

On May 13, the delegation completed its visit to Egypt.