Source: SBS
Pope Tawadros ll has touched down in Sydney for the first time as the Pope of the Coptic Church for a 10-day pastoral visit.
Natalya Mihailova | 30 August 2017 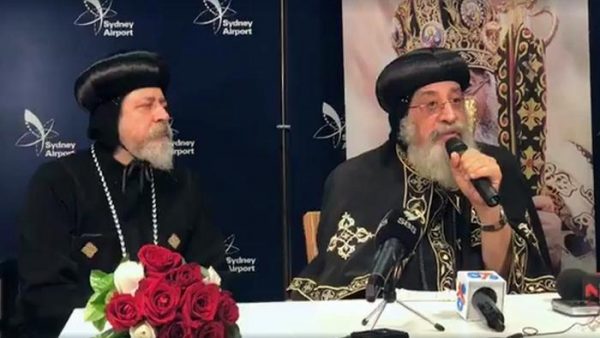 Pope Tawadros II, the Patriarch of the Coptic Orthodox Church, has weighed in on same-sex marriage after touching down in Sydney for a historic visit to Australia.

Pope Tawadros II is on a 10-day pastoral tour during which he’ll meet Prime Minister Malcolm Turnbull and various other leaders, as well as meeting the local Coptic community.

After arriving at Sydney airport, Pope Tawadros II was asked about same-sex marriage, amid intense debate in Australia ahead of a national marriage survey.

He said according to the scriptures of the Holy Bible, “There is no – at all – same sex marriage”.

“Therefore this marriage is completely refused from the Christian faith,” he added.

“This is not acceptable and it is considered as a sin. It’s sin.”

Pope Tawadros II also spoke about the importance of unity in Egypt and the message of love between the different churches.

He said he will praise Australia’s multicultural society with Mr Turnbull when the pair meet next week.

“Firstly I want to thank him for good relations and good cooperation with Egypt and also I will thank him for the presence of the Coptic Church in here,” Pope Tawadros II said.

“And also about his experience about the different nationalities here, live together in harmony and tolerance. As this is a good experience to know about Australia.”

The Pope also stressed the significance of translating and transferring Egyptian Coptic traditions and Christian education to countries like Australia.

“How to translate many books… in Australia according to the culture here,” he said.

“We are trying to bring solutions.”

Pope Tawadros II, who was ordained in 2012, was greeted by a queue of bishops and priests on Wednesday at Sydney Airport to demonstrate the support of Australia’s Coptic community which is the third largest outside of Egypt.