Crisis in Ukraine: Truth is the First Casualty

Source: In Communion
Not only in Ukraine and Russia but in every Orthodox jurisdiction, national identity often influences our sense of self and our public identity more than the fact of being baptized Christians among whom “there is neither Greek nor Jew” — a Christ-centered community in which all national labels are secondary.
Jim Forest | 09 May 2014 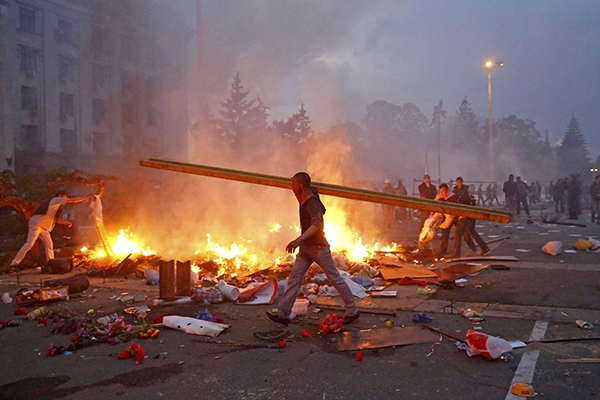 Wars are fought not only with weapons but with words and propaganda. As the Ukraine crisis unfolds, charge and counter-charge are exchanged as Kiev, Moscow and Washington assert, accuse and deny. Are the “green men” Russian military, as Kiev and Washington allege, or are they Ukrainians merely replicating locally what was done on the Euromaidan in Kiev a few months earlier, as Moscow asserts? Who ordered snipers to open fire on the people on the Euromaidan several months ago? Who distributed leaflets ordering Jews to register with authorities? Was it the new government of the self-proclaimed Donetsk Republic, as Kiev claims, or was it a provocation aimed at discrediting pro-Russian separatists? Who killed three men at a checkpoint in Slovyansk in late April, Russian military intelligence or Ukrainian nationalists? Who is to blame for the blaze in Odessa on the 2nd of May that trapped and killed so many on the “pro-Russian” side?

Spend an hour or two on the web reading texts about the conflict in Ukraine. It’s impressive how much bluster, hyperbole, exaggeration, conspiracy theories, overheated rhetoric and plain lies have come from every side: Kiev, Moscow, Washington, London and other European capitals. Hour-by-hour the ancient Greek proverb — “In war, truth is the first casualty” — is being amply demonstrated.

No one would deny that the Yanukovych government was corrupt, as was the government that preceded it. That many Ukrainians were fed up with such leadership is understandable. It’s no less understandable that Ukraine’s Russian-speaking minority is outraged and, after being treated for years as second-class citizens with limited rights to use their own language, that many of them might prefer either a high degree of regional autonomy or being part of Russia. Only free elections, not only at the national level but oblast-by-oblast, can demonstrate the will of the people. Meanwhile the Ukrainians have a right to sort out their own affairs without outside interference. Regardless of the outcome in Ukraine, the US, NATO and Russia should stand back.

But of course they are not standing back. It is reasonable to assume that much that is happening in Ukraine is encouraged if not choreographed by strategists in the US and Russia plus various European capitals. In the western press, the fact that the CIA has been quietly meddling in the affairs of Ukraine has been regarded as a detail of minor significance, even though the CIA has many times in the past played a decisive role in arranging “regime change.” White House spokesman Jay Carney confirmed that CIA Director John Brennan visited Kiev in mid-April and met with principal Ukrainian officials. With a straight face Carney said that it was absurd to imply that US officials meeting with their counterparts Kiev was anything other than routine. The claim would be laughable if the consequences of enmity were not so disastrous.

Certainly the major powers have their special interests and goals. Western European countries see an opportunity to include Ukraine in the NATO alliance and to bring Ukraine into the European Union while in the process “reforming” Ukraine’s economy as is being done, for example, in Greece. Russia seeks to keep NATO at a distance and, having reclaimed Crimea, may also see an opportunity to reabsorb the more Russian-speaking oblasts in eastern Ukraine that were lost when the USSR collapsed. Even if Russia does not seek to expand its borders, it may want to force any future elected Kiev government to grant a considerable degree of autonomy to oblasts in which the majority of the population are Russian speakers.

A major factor in the conflict is ultra-nationalism, which infects not only a large part of the overall population but also the membership of churches. There are three Orthodox jurisdictions in Ukraine whose borders are drawn in part along lines of language and nationality (Ukrainian or Russian). There are also both Eastern rite as well as Western rite jurisdictions in communion with Rome, especially in western Ukraine.

It is not a situation in which Christians on the outside can embrace one side and denounce the other. All sides have legitimate claims — and each side has its fanatics and thugs. The only hope for a peaceful solution is dialog and free elections.

Perhaps it is by stressing a deeper unity that Orthodox Christians working for peace can best help remind our fellow Christians in the midst of this conflict of a communion that transcends national and linguistic identity. While deep divisions are obvious and unhealed wounds many, all Christians, no matter of what jurisdictional segment, would respond to the exclamation “Christ is risen!” with the immediate and unified response, “He is risen indeed!”

That Paschal affirmation should shape our response to the world we live in, but often it doesn’t. Not only in Ukraine and Russia but in every Orthodox jurisdiction, national identity often influences our sense of self and our public identity more than the fact of being baptized Christians among whom “there is neither Greek nor Jew” — a Christ-centered community in which all national labels are secondary.

As Patriarch Bartholomew of Constantinople recently said, while on a visit to The Netherlands, “The concept of the nation cannot become a determining factor of Church life or an axis of Church organization. Whenever an Orthodox Church succumbs to nationalist rhetoric and lends support to racial tendencies, it loses sight of the authentic theological principles and gives in to a fallen mindset, totally alien to the core of Orthodoxy.”

Note: Resources for parish and private prayer as well as various texts can be found on the Ukraine Crisis page posted on the OPF’s In Communion web site:
www.incommunion.org/2014/03/17/pray-for-peace/

True stories become legends and legends are compressed via symbols into myths. The St. George of myth was…

In 1941, after a period of neutrality, Bulgaria allied itself with Nazi Germany. This was a decision partly…