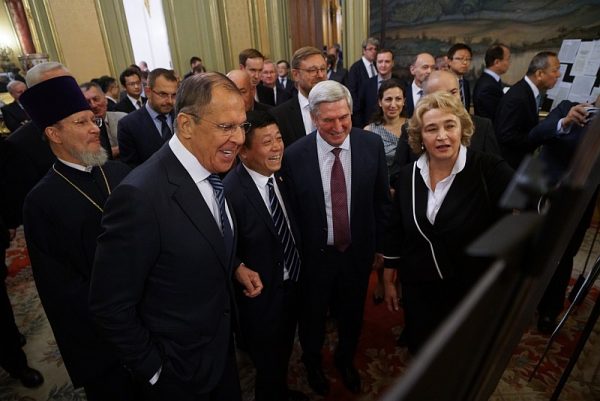 On September 30, 2019, an exhibition of photographs and documents on the history of Soviet- and Russian-Chinese cooperation was opened at the Receptions House of the Russian Ministry of Foreign Affairs in Moscow.

Opening the exhibition, Mr. Sergey Lavrov, Russian Federation minister of foreign affairs, noted, ‘Certainly, relations between the two nations are not limited to the seven decades alone. Their roots lie deep in centuries, going through which we have learnt to understand each other, to act together, to be good friends and good neighbours.’

The exposition was prepared by the foreign ministry with the use of materials from the Archives of the Russian Federation Foreign Policy and sources from a number of Chinese archives, Mr. Lavrov said and expressed confidence that the new exhibition ‘will serve to preserve the memory of historical landmarks of our common past and will become a noticeable event in the course of numerous festivities devoted to this date’.

In his speech, Mr. Zhang Hanhui, Chinese ambassador to Russia, pointed to the importance of exchanges in the humanitarian area, which ‘pave the way to people’s souls’, thus promoting better understanding among nations.

Among the participants in the ceremony was Archpriest Nikolay Balashov, vice-chairman of the Moscow Patriarchate department for external church relations (DECR).