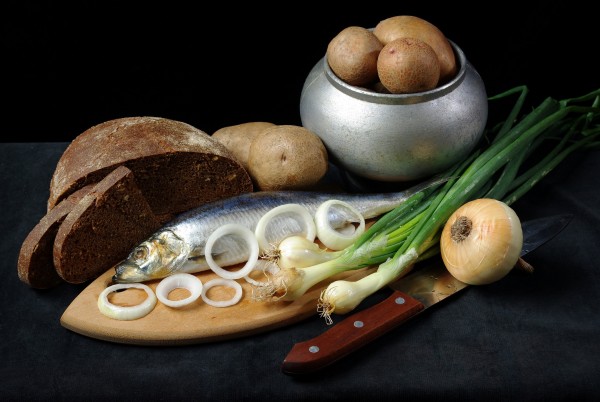 At the end of Romans, starting with chapter 12, St. Paul begins to give practical application.  It is the common pattern in St. Paul’s letters to start by thanking and praising God (doxology), and then move on to explaining a little about who God is and what He has done for us (theology), and then to move on to behavioral application, the “so what” of theology: how we apply theology in our life to be transformed and saved (soteriology).  One of the practical aspects of Christian life that St. Paul deals with at the end of Romans is fasting.  But he does not say what most people think he will say.

In Romans 14, St. Paul contrasts those who fast (eat only vegetables) with those who “eat all things.”  What is surprising is that St. Paul says that “he who is weak eats only vegetables.”  That is, the weak are the ones who fast while others “believe they may eat all things” and so don’t fast.  Although the exact historical context in which St. Paul is addressing this matter of eating or not eating is not the context of liturgical fasting; nevertheless, the Church presents this passage on the Sunday of Cheesefare (the last Sunday before Great Lent begins) as the model for Christian liturgical fasting: “He who is weak eats only vegetables.”

For almost all of my life I have been under the impression that it was the spiritually strong who fasted.  So when I exegeted this passage, I used all of the exegetical tricks to make this passage not really mean what it said.  I just couldn’t wrap my mind around the possibility that fasting was a manifestation of weakness.  After all, Jesus fasted, the Apostles fasted, great Christians throughout the ages fasted.  How could fasting be for the weak?  Later on in the chapter, St. Paul turns the table somewhat and argues that although “nothing is unclean,” one should not eat anything if it might offend the weaker (fasting) brother.  So I interpreted the first part of the chapter to mean the exact opposite of what St. Paul actually says.  I argued that it was a rhetorical set-up to make the point at the end of the chapter that the strong (whom, I argued, St. Paul was facetiously calling “strong”) should fast anyway for the sake of the weak (whom, I argued, St. Paul was facetiously calling “weak”).  Thus I got the passage to mean what I already believed.

However, recently I have begun in the smallest possible way to become aware of the mystery of weakness.  Jesus fasted because he was weak–He took on our weakness.  The Apostles and Saints fasted because they knew their weakness, because of their dependence on God, because of their weak, fickle and unreliable self.  In their weakness they fasted, and in fasting found God’s strength.  I no longer read St. Paul’s use of weak and strong in this passage as examples of facetious language.  Rather, I see St. Paul revealing a mystery.  God’s strength is perfected in weakness.

St. Paul’s instruction to those who do not fast is quite interesting.  He says, “let not him who eats despise him who does not eat.”  It is very easy, even natural in a merely human sort of way, for the strong to despise the weak.  “Those who need a crutch use a crutch,” the strong may say (or think) concerning the weak.  The strong see no need to fast too much, to pray too much, to pay too much attention to matters of the soul.  And thus the strong may be tempted to despise those whose religious zeal seems to be too much.  The strong may indeed see (or merely think they see) the many weaknesses of the weak ones who fast and pray so diligently, and because of those weaknesses be tempted to look down upon or despise them.  St. Paul warns the believing strong ones not to despise the weak ones, for as St. Paul says elsewhere, it is when I am weak then I am strong.

In the Pachomian communities (Egypt, 4th -7th centuries), the monks were commanded to eat with their large cowls pulled over their heads so they could not see what or how much their neighbour was eating.  We would not be hurt if we practiced a similar discipline.  I don’t suggest that we wear cowls to eat, but I do suggest that we take St. Paul’s words at face value: “Do not destroy the work of God for the sake of food.”  What my brother or sister eats of doesn’t eat is none of my business.  Who am I to judge God’s servant?

St. Basil the Great, in letter 156, responds to a priest asking for advice and help to resolve…

In 1993 Bill Murray starred in Ground Hog Day, a movie about a completely selfish weather broadcaster who…

Learning The Prayer Of The Heart

In 1851, an anonymous monk on Mount Athos wrote a book on prayer.  The title of the book…

Most viewed articles
Patriarch Kirill: Not Only People, But Churches Too, Can Depart from God216
A Christianity of the Catacombs181
The Truth About Riches110
Thoughts on Theophany and Revelation105
Archbishop Makarios of Australia: ” the Great privilege of the Orthodox Church is that we live in communion”68
Metropolitan Onuphry Speaks on How to Protect One’s Soul From Sin47
Most millennials, Gen Z adults support bans on abortions when baby’s heartbeat is detected: poll27
How to live the Spiritual Life (Part I)1
Most popular authors
Pravmir.com team358
Archpriest Lawrence Farley181
Fr. Gabriel Bilas110
Elissa Bjeletich105