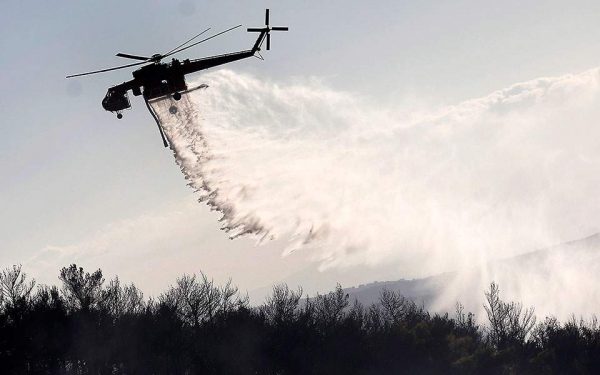 A monastery was evacuated and the residents of three villages were told to be ready to leave after a big fire broke out inside firestland in central Evia early Tuesday morning.

The fire service was alerted shortly after 3 a.m. on a blaze in the the area of Agrilitsa, in the municipality of Dirfys-Messapia, and send 80 firemen with 39 vehicles, who are assisted by four aircraft and two helicopters.

Authorities evacuated the Monastery of Panagia Makrymallis for precautionary reasons and the villages of Agrilitsa, Kondodespoti and Makrymalli are on alert, TV channel SKAI reported.

The fire-fighting effort was hindered by the rough terrain and strong winds fanning the flames which are burning a protected forest listed in EU’s Natura 2000 network.

The smoke from the blaze reached all the way to Athens, covering parts of the city with haze.