Source: Neoskosmos.com
Pravmir.com team | 28 August 2018
"We will always stand by our brothers and sisters," says Bishop Nikandros of Dorylaeon 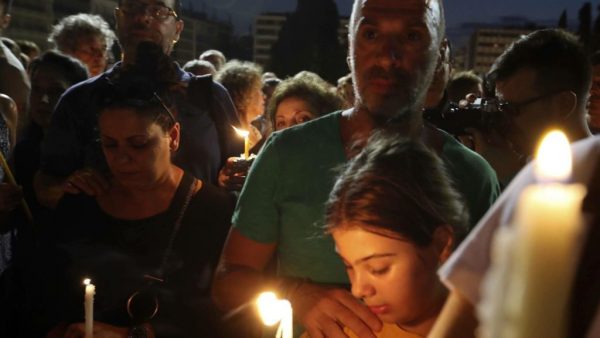 Photo from the memorial vigil held in Syntagma Square, a week after the devastating wildfires in Attica. Photo: AAP via AP/Thanassis Stavrakis

The Greek Orthodox Archdiocese of Australia reached out to its parishioners for donations managing to raise an impressive $630,000 for the victims of the devastating wildfires in the outskirts of Eastern Attica on 23-24 July which cost the lives of 94 people.

“We would like to express our warmest and heartfelt thanks to all our Greek Orthodox faithful all across Australia, for raising this extraordinary amount, which will assist our Greek brothers and sisters,” stated Bishop Nikandros of Dorylaeon in a statement to Neos Kosmos.

“There has been an amazing outpouring of empathy here in Australia and we are truly humbled and incredibly grateful to have witnessed such solidarity and support from our wider community. This is a great reminder that the bond between Greek Australians and our fellow countrymen remains strong and unbreakable, particularly in times of need,” he added.

According to the Greek Orthodox Archdiocese of Australia, the $630,000 raised will soon be distributed to the Metropolis of Kifisia and Amarousion as well as the Metropolis of Mesogaia and Lavreotiki and it will be used to set up temporary housing for those who lost their homes to the fire and for purchasing building supplies and equipment in order to rebuild some of the homes that were completely destroyed.

Meanwhile, Greek Australian communities around the country are also joining forces to rally for the bushfire victims, launching urgent appeals and running radio-marathons in an attempt to collect contributions and offer assistance to those affected by the tragedy.

“July 23 will go down in history as one of Greece’s darkest days and it’s during those times that we need to show our unity and support towards our brothers and sisters.
“We would like to take this opportunity and thank you all for contributing so generously to this cause,” concluded Bishop Nikandros.

At the same time, President of the Greek Orthodox Archdiocese of Australia Inter-Communities Council of NSW, Kosmas Dimitriou sent a letter of appreciation on behalf of His Eminence Archbishop Stylianos, Primate of the Greek Orthodox Archdiocese of Australia, to Australian Prime Minister Malcolm Turnbull expressing the gratitude of all Greek Australians for the assistance provided by the Australian Emergency Services in the affected areas of the tragic bushfires that struck Greece.

“We would like to extend our sincere gratitude for sending out a team of 10 Disaster Assistance Response Team members from Fire and Rescue NSW and Victoria Fire and Emergency Services to conduct fire impact assessments in the affected areas,” he wrote.

“This heartfelt gesture once again is evidence of the longstanding friendship and ties between Australia and Greece, for which we as Australians of Greek heritage remain steadfast and grateful,” Mr Dimitriou concluded in his letter.