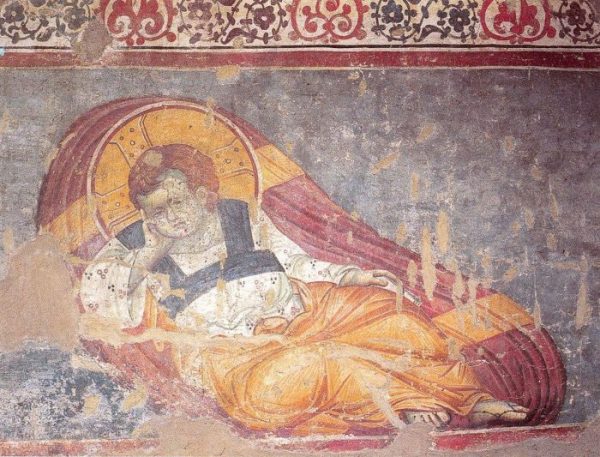 Iconic Byzantine hagiography Jesus is pictured at rest in this painting. Credit: Wikipedia

The iconic Byzantine hagiography of Manuel Panselinos will be presented in a live streamed presentation on the platform Zoom on Tuesday at 7 pm with Tasos Papadopoulos narrating the story of his life and works, reports the Greek Reporter.

The name of Panselinos has been associated with the highest Byzantine art and his frescoed hagiographies have been considered as important as those of Giotto and Raphael.

Born in the 13th century in Thessaloniki, Panselinos was the most important hagiographer of the Macedonian school and one of the greats of the Palaeologian Renaissance.

His works can be found in many monasteries on Mount Athos, including those of  Vatopedi, Lavra, Protatos and Karyes. Archaeologists believe some are also in the Agios Efthymios Chapel in Thessaloniki.

Panselinos’ work was considered archetypal, functioning as a universal school for all future hagiographers, creating the fundamental principles that are the beacon showing how all Orthodox ecclesiastical painting should be done.

Panselinos believed that art should be firmly anchored in tradition, and he was strict about that principle as time went on. He fought for the preservation of historic Orthodox iconography when Byzantine art was threatened with alteration by Western elements.

Since very little is known about the great hagiographer, his life remains an enigma, which the presenter will try to decipher during the live-streaming exhibition.