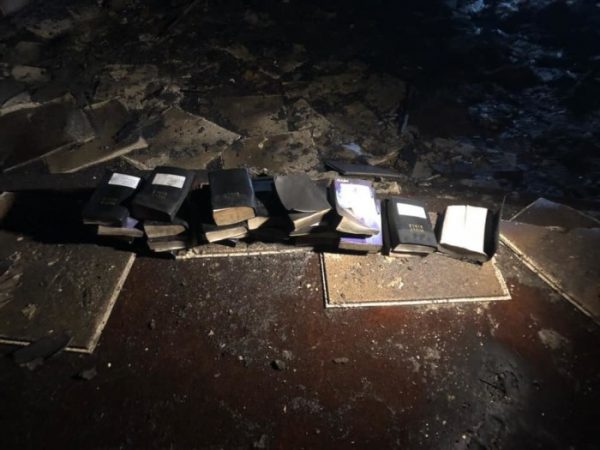 Members of the Coal City Fire Department in West Virginia praised God after finding these Bibles inside a local church after a devastating fire. | Photo: Facebook

Members of the Coal City Fire Department in West Virginia acknowledged God’s power Sunday after a devastating fire burned down a local church but failed to destroy any of the Bibles inside.

“Picture this, a building so hot that at one point in time, firefighters had to back out. In your mind, everything should be burned, ashes. Not a single Bible was burned and not a single cross was harmed!! Not a single firefighter was hurt! Prayers for the pastor and the congregation today,” the fire department wrote in a post on Facebook about the fire that destroyed the Freedom Ministries Church early Sunday morning.

Firefighters say they were dispatched to the scene of the fire in Grandview, West Virginia at about 12:58 a.m. on Sunday to assist the Beaver Volunteer Fire Department.

“Though odds were against us, God was not,” the department said.

The post from the Coal City Fire Department has since gone viral prompting more than 3,000 comments and nearly 40,000 shares on Facebook.

“Out of every structure fire I have responded to in the past 20 years, not one Bible has burned, they might have smoke damage or charred around the edges but you could still read every page. We gave the owners back a lot of Bibles over the years. It just goes to show that God’s word is more powerful than the devil’s fire and fury no matter how hot it gets. God was watching over all you guys last night, and every fire call y’all go on,” wrote Dean Vandall in the most popular comment on the post which had attracted nearly 7,000 reactions as of Tuesday morning.