The Foolishness of the Cross

Source: Notes on Arab Orthodoxy
We nailed ourselves to the cross once and for all in order to say that we renounce everything that the world has to give, to say that we are needy for the grace of our Lord and not needy for the wealth of this world.
Metropolitan George (Khodr) of Mount Lebanon | 17 September 2014 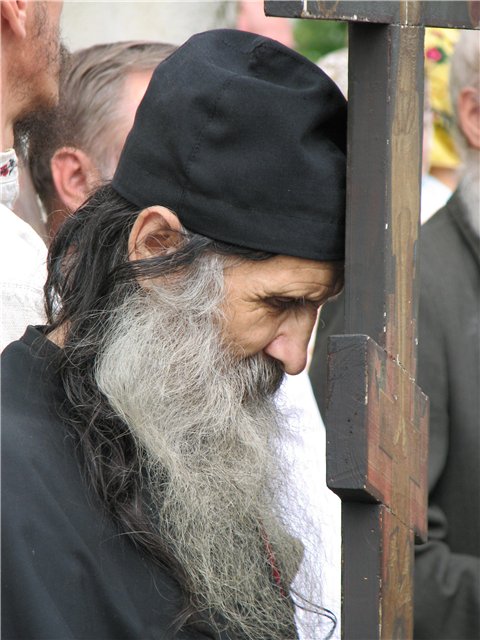 The cross has many meanings, but I will attempt to summarize the most important among them from what the Apostle Paul wrote in his First Letter to the Corinthians, part of which we read today. The apostle found himself in Greece before a great civilization. He was confronted with beautiful sculpture and architecture in Athens, as he was likewise confronted with the widespread philosophical school there, in the public square, the Areopagus, under that great hill in the heart of the city. The scholars spoke and the rhetors addressed the apostle and did not accept him. He headed for Corinth, to the laborers in the port, and these poor and neglected people accepted the faith from him, so Paul realized that no one would believe if he completely held to his intellect, if his intellect did not submit to the Gospel of Christ.

Likewise, the Jews expelled him from all their synagogues, as he would frequent their gatherings in Asia Minor and Greece. They expelled him because they despised the Crucified One. The Jews sought  signs from heaven and miracles. Moses had trained them and they thought that God makes Himself manifest and magnifies Himself through natural miracles. The Jews thought that God is a mighty and brutal tyrant and Plato thought that the gods are beautiful. In Jerusalem they were attached to might and in Athens they were attached to reason and beauty.

Along came Paul, the laborer, the tent-maker who had not read all of Greek philosophy and who was weak in the body, prone to illness as we may deduce from his Letter to the Galatians. He comes before the entire world and says, “The word of the cross to those perishing is folly”, foolishness, madness because people do not seek a crucified god. Some of them seek a dominant god, and God does not dominate over them. Others seek a brilliant, beautiful god, but God was not beautiful upon the wood of the cross. Some seek a sign and others seek wisdom, and that is a rational mindset, but for we who are saved, Christ is God’s power and God’s wisdom. God comes and dwells among the poor. He rejects cruelty. He rejects it forever. He challenges the powerful. He constantly challenges them. He challenges those who are proud of their beauty, their knowledge and their gifts. Christ destroys our delusions and kills our vainglory. We have lived in this Middle East for over fourteen centuries and our glories are in the blood of our martyrs, in worship, and in the strong theology by which we speak of God.

We nailed ourselves to the cross once and for all in order to say that we renounce everything that the world has to give, to say that we are needy for the grace of our Lord and not needy for the wealth of this world. That is, everyone who has adopted the religion of the cross has taken up death. We are alive and provided-for, but we are risking death. That is, at every moment, we are putting our passions to death so that we may live in the Lord Jesus above the sun, according to the words of Paul, “God forbid that I should boast except in the cross of our Lord Jesus Christ, by whom[a] the world has been crucified to me, and I to the world” (Galatians 6:14).

Crosses are not put up with lights in the streets in order to say that we are here in a neighborhood and others are in another neighborhood. The cross does not divide up the living. The cross is not a division,  but rather a reaching out. It is God’s heart, open to the universe. We are triumphant, yes, but we do not go on a crusade for this triumph. We do not fight. We do not slaughter anyone. We are triumphant. There is a victor and there is one vanquished. But the victor is the believer and the vanquished is the believer. How can this be? Vanquished are the believer’s passions. You alone are the battlefield. Your Christ is triumphant in you, and your devil is vanquished in you. We are seekers of peace, seekers of joy, seekers of resurrection. Through the cross, we go to the resurrection.

This world is passing away. If you are pleased with this, then you are with the Crucified One. If you want for yourselves to conquer people, then you are with the Jews because the god of the Jews is a conqueror. If you want yourselves to be wise and astute, believing in your minds and your earthly arrangements, with the Greeks, with the pagan gentiles. But if you reject both this and that, if you are mad, if you are able to go mad, if you enjoy the grace of divine foolishness, if they point it you to say that you are fools who do not understand anything, if they belittle you and despise you and cast you aside, then be pleased that you have become like your Teacher, hanging on the tree. However, you must understand that by this tree alone and by this path to death are you triumphant. This is your gospel.