Source: Democracy & Freedom Watch
Natalya Mihailova | 04 January 2015
TBILISI, DFWatch–A witness has told how a Georgian priest helped save people before he himself perished in the Norman Atlantic disaster. 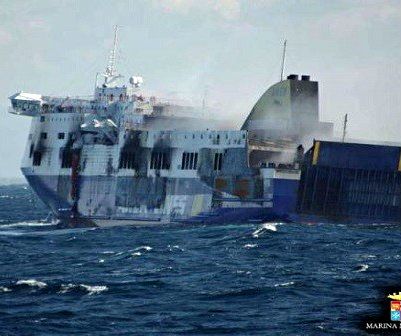 He said Kartozia comforted him and gave him the strength to bring his nine year old son, wife and in-laws to safety.

“He was the one to save me, to give me strength,” the 25 year old told the newspaper.

When the fire started he took his son and started to run, but felt scared.

“He urged me, reassured me, told me to be confident and think about God.”

When people got to where the lifeboats were and it was his turn, the priest saw a woman with a little girl, possibly of Greek nationality, and he told them to go before him. Then when he was leaving the ferry the rescuing rope yielded. Someone threw him a life vest but he was unable to reach it due to the rough sea and he drowned, Irakli recalled.

The priest was on his way to visit the grave crypt of Saint Nicholas in Bari, and had with him a backpack with icons which he said he would always carry with him.

There were eight Georgians on the ferry, all of whom were rescued except Kartozia. At least ten people died in the catastrophe.

Italian TV channel Rai 2 reported that when Kartozia’s body was found on the shores at Lecce a backpack was also found filled with icons.

In Georgia, comparison is drawn between the priest’s courage and the theologian Grigol Peradze, who was arrested during World War II for sheltering Jews and died in Auschwitz. Peradze was canonized as a saint by the Georgian Orthodox Church in 1995.