Natalya Mihailova | 30 March 2017
Strasbourg, March 30, Interfax - Central tent, cylinder and golden domes with crosses were set up on a Russian church of All Saints in Strasbourg. 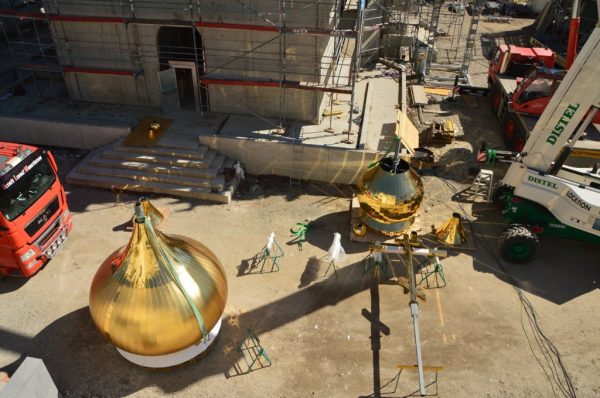 They were made in Moscow and brought to France in disassembled form in three trucks. Assembling of the domes took several weeks and took place in a town of Esho not far from Strasbourg, the parochial press service reports.

Representative of the Russian Church to the Council of Europe, rector of the church Hegumen Philip (Ryabykh) consecrated the tent, domes and the crosses, officials of the building companies involved in the construction attended the ceremony.

The building is carried out only on private donations. Today about 2,000 people from the whole world and several Russian companies contributed in erecting the church.

Most viewed articles
Restoring Our Humanity Through the Eucharist133
On the Dormition Fast96
Dormition Fast: Lesson on Silence43
Faith and Moral Freedom31
Patriarch Kirill: “The Memory of the New Martyrs will Help Us to Be Faithful to Christ amid Modern Temptations”23
Patronal Feast Celebrated in St. Anna Convent in Vashkivtsi15
Most popular authors
Pravmir.com team134
Fr. Gabriel Bilas133
Metropolitan Anthony (Pakanich)43
Archpriest Michael Gillis31