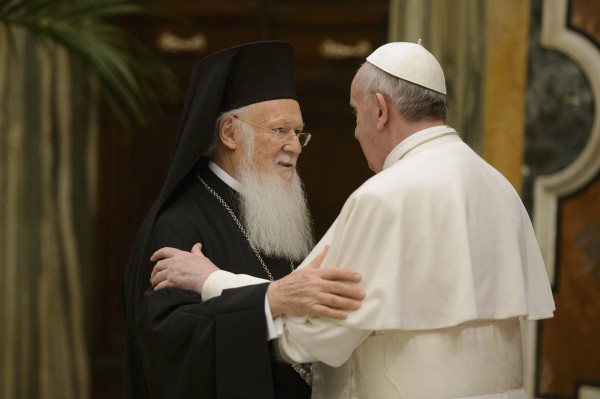 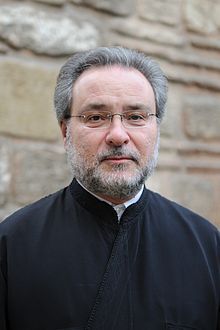 As a theological adviser to the ecumenical patriarch, Archdeacon Chryssavgis had previously participated in such prayer services. But “an amazingly moving moment” happened that day that caught his attention.

“(It) wasn’t captured by photographers, because it wasn’t expected in the program,” said Archdeacon Chryssavgis during a recent address at Marian University in Indianapolis. “The pope spontaneously initiated it.

“As they were listening to readings about repentance for the sins of arrogance of the past, the pope leaned over and took Patriarch Bartholomew’s hand and kissed it. Whereupon, the patriarch, himself shocked, stood up out of his chair and embraced the pope.”

Important ecumenical events where the pope and the ecumenical patriarch meet — even those where unplanned dramatic gestures are made — have become almost commonplace over the past 50 years.

But for almost 1,000 years before 1964, there was almost no communication between Catholic and Orthodox leaders.

Then Blessed Paul VI and Ecumenical Patriarch Athenagoras of Constantinople met in Jerusalem in January 1964. Later that same year, the bishops of the Second Vatican Council approved decrees on ecumenism and on the Eastern Churches, both of which sought to revive long-dormant relations between the Catholic and Orthodox churches.

Archdeacon Chryssavgis spoke about the 50th anniversary of these landmark events during his address.

He said that the very notion of an Orthodox theologian giving a lecture at a Catholic university prior to 1964 would have been “unthinkable.”

“Relations between the two sister Churches have improved so dramatically — despite setbacks and tensions — that contacts between regional and global leaders, as well as local parishes and individual faithful, are today almost taken for granted,” Archdeacon Chryssavgis said.

Over the course of his lecture, Archdeacon Chryssavgis described the encounters that have taken place over the past half century that have led so many Catholics and Orthodox to see them as commonplace.

They included Ecumenical Patriarch Bartholomew’s “spontaneous decision” to attend Pope Francis’ inaugural Mass in 2013, “the first and only time in history that one leader was attending the installation of the other.”

Regarding the dramatic moment shared by the pope and ecumenical patriarch in Jerusalem in May, the archdeacon said that as he watched the two leaders together approach the Church of the Holy Sepulcher, “I saw, above all, two frail mortals bowing down at the stone of unction where Christ’s body was anointed after the crucifixion to venerate the one who alone could provide unity, the one who alone could provide immortality.” 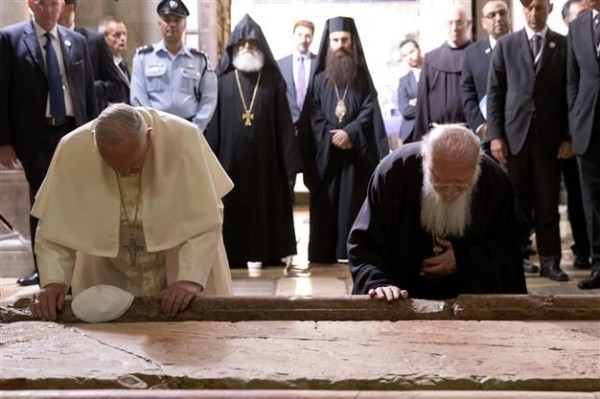 The meeting of the two church leaders was organized in large part to mark the 50th anniversary of the historic 1964 meeting there between Blessed Paul and Patriarch Athenagoras.

Ongoing ecumenical efforts of Catholic and Orthodox Christians, Archdeacon Chryssavgis said, can help counter the “abuse of religion for political and other secular purposes,” the persecution of Christians, especially in the Middle East, ecological crises and “the injustices inflicted on the weaker members of our society today.”

“All these call for a common and a collaborative solution to the problems that still divide us as churches,” he said.

Those divisions that have persisted through 50 years of efforts to promote unity between the churches should not discourage the faithful of both from continuing those efforts, Archdeacon Chryssavgis said.

“There is no alternative path to dialogue and reconciliation,” he said. “To discontinue would mean a return to our estranged past. East and West have followed separate ways since the 11th century, but they must be constantly reminded of their shared common history in Scripture and tradition, where they can always rediscover so much common ground for the future.”

During a question-and-answer period that followed his lecture, Archdeacon Chryssavgis said promoting greater unity between Catholics and Orthodox Christians only “takes a little bit of openness and, ultimately, love” and can be as simple as one congregation inviting members of the other congregation to events that they are sponsoring.

He also reflected on the way in which the persecution that both Catholics and Orthodox Christians are experiencing in the Holy Land and the Middle East can increase solidarity between them.

“We bear a common cross,” Archdeacon Chryssavgis said. “There can’t be any other symbol that we hold as Christians together than the cross.

“If we’re not reminding ourselves that the cross is a shared burden to bear, if, somehow, we’ve become comfortable in our own issues, our own concerns … somehow we’ve forgotten the cross,” he said.