Source: DECR
Natalya Mihailova | 02 February 2015
On 1 February 2015, Sunday of the Publican and the Pharisee, the 6th anniversary of enthronement of His Holiness Patriarch Kirill of Moscow and All Russia, the Divine Liturgy was celebrated at the Cathedral of Christ the Saviour. 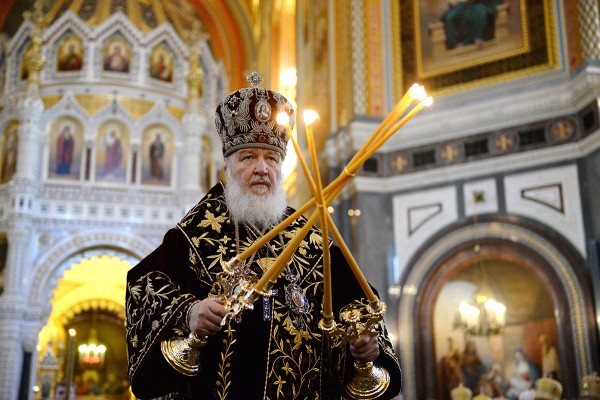 With the blessing of His Holiness Patriarch Kirill, the restored Smolensk “Hodigitria” Icon of the Mother of God was brought to the Cathedral of Christ the Saviour, where it will be available for veneration until February 10. Then the icon will be transferred to the Cathedral of the Dormition in Smolensk, wherein it was kept from the 17th century onward.

During the Little Entrance, His Holiness Patriarch Kirill elevated Bishop Pavel of Khanty-Mansiysk and Surgut and Bishop Vladimir of Chita and Transbaikalia to the rank of metropolitans.

After the Litany of Fervent Supplication, the Primate of the Russian Orthodox Church offered a prayer for peace in Ukraine.

After the Liturgy, a thanksgiving was said.

On behalf of the members of the Holy Synod of the Russian Orthodox Church, His Beatitude Metropolitan Onufry read out the congratulatory address to His Holiness Patriarch Kirill and presented him with an icon of the Saviour.

Mr. Alexander Beglov, Plenipotentiary Presidential Envoy to the Central Federal District, greeted the Primate of the Russian Orthodox Church on behalf of the President of the Russian Federation, Mr. Vladimir Putin.

Mr. Vladimir Medinsky, Russia’s Ministry of Culture, told His Holiness Patriarch Kirill and all those present about the restoration of the Smolensk Icon of the Mother of God.

The Smolensk “Hodigitria” Icon accompanied the Russian army during the War of 1812. Before the Battle of Borodino, the miracle-working icon was brought to the battlefield on the order of the Commander-in-Chief, Mikhail Kutuzov. There a prayer service was said in the presence of the Commander-in-Chief and the army. As Mr. Medinsky noted, the research done during the restoration proved that the icon had been written at the turn of the 16th century.

The Primate of the Russian Orthodox Church addressed the worshippers with a primatial homily.

Most viewed articles
An Extraordinary Session of the ROCOR Synod of Bishops Convenes138
How to Get Rid of Spiritual Infantilism?103
How to Respond to Opposition to the Gospel100
A Piece of Rock Falls Down on the Skete of St. Anna on Mt. Athos84
His Beatitude Metropolitan Tikhon Issues Statement on Tragic School Shooting in Texas60
PRAY: 14 Students, One Teacher Dead After Texas Elementary School Shooting42
Romanian priests in Madrid draw conclusions on the benefit of praying together with family members41
Three Words32
test1
Most popular authors
Pravmir.com team222
Priest Andrei Chizhenko103
Archpriest Basil Ross Aden100
Metropolitan Tikhon of All America and Canada60
Associated Press42
Aurelian Iftimiu41
Archpriest Geoffrey Korz32
Maria Trushanina1