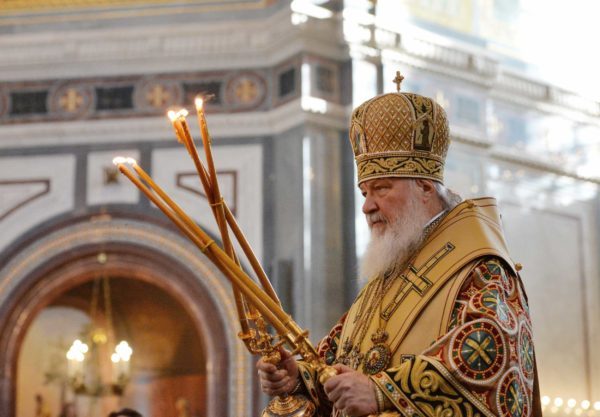 According to the Primate of the Russian Orthodox Church, faith underlies national identity of Orthodox people, and its proper perception is necessary so as “not to dissolve in the globalization boiler and not to lose any basis of national life”.

“Orthodoxy has largely shaped our national identity… Today we can see how national cultures either dissolve or lose their positions in the face of global mass culture. But people’s spirituality, their faith are the pivots that preserve national identity”, – stated His Holiness, Patriarch Kirill, during the solemn reception after the Liturgy of St. Basil the Great and the Triumph of Orthodoxy rite at the Cathedral of Christ the Savior.

The Primate noted that faith “helped in shaping our peoples”, “mobilized them to repel the aggression of foreign invaders” and “inspired our ancestors in the most difficult circumstances”.

“help a people not to go into artificial isolation, but to act aggressively in the international arena, protecting one’s national spiritual and cultural identity“.

“Peoples’ national identity undergoes severe deformation today… Orthodoxy is of vital importance to Russia and many other countries, with all due respect to other religions and confessions. As our predecessors saved Orthodoxy in the distant IX century, so should and must Orthodoxy be saved not only as faith, but also as spiritual basis of many peoples’ lives in the current incredibly severe conditions of globalization and cultural transfusion”, – His Holiness, Patriarch Kirill, believes.