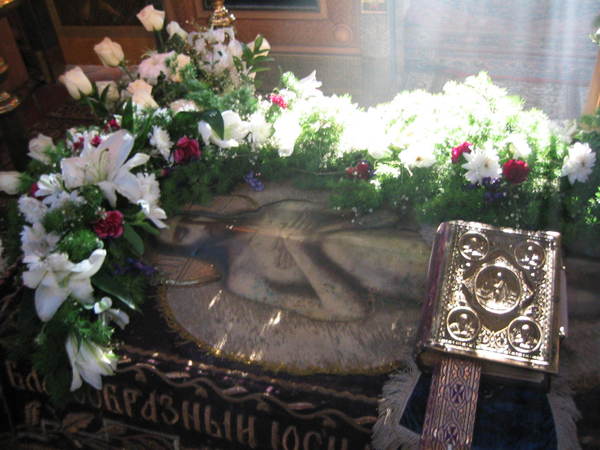 On this holy, great and awesome Saturday when the human soul of Christ was torn away from His Body, and when His incorruptible, holy Body rested in the tomb, what a deep sense of awe and what horror, what terror filled all creation. … A sense of awe, because all creation had recognized in Him the Living God, God’s Word, the Creator of all things; and what terror, what horror at the sight of His death! Humans in their blindness, prisoners of sin, prisoners of their mortality could continue to live insensitive to what was happening. Pilate went his way, the soldiers continued in their barracks, the multitude dispersed having been present at an awesome, strange event, but an event that remained undeciphered for them; and the High Priest rejoiced, and Judas died. But the whole created world knew more about what had happened than the humans.

On the first great Sabbath, God Who had created all things, rested from His labours, and committed the care and the charge of the world He had made to man, man who belonged to the created world at the very root of it; because he was not made as a fulfilment, as the greatest of all beings in a line of evolution: he was made of the clay, of the dust of the earth; lower he could not go, but at the same time, because he was partaker of the lowest there was, he partook of everything that had been born of this primeval matter which God had called into existence.

At the same time man was possessed of the breath of God, belonged to two worlds, indeed, the world of the created and of the uncreated. And his vocation was to lead all beings into that fullness to which he himself was called; from purity and innocence to the maturity of holiness, to that maturity which Saint Paul describes when he says that all things in the world were made in such a way that God be all in all, that all things created be, as it were, the vesture of God, the Body of God, filled with divinity, partakers of it: man and all the rest partakers of the divine nature.

But then man fell, he betrayed his vocation, he fell away, and the world stood in dismay, lost, without a leader who would lead it to the fulfilment of its calling. It would continue to exist — yes; but it could not become what it was called to be without man; and Paul, perceiving this so deeply said that the whole creation is groaning for the revelation of the children of God, for the day when man should become man again, as God had wanted, called him to be, made him to be, and when all creatures would find in him a vision of what they were to become and a leader on the way to this becoming, this eternal growth into God.

And then Christ appeared, the Son of God Himself became the son of man, and all things created, from the smallest atom to the greatest galaxy recognised in Him the Creator, but at the same time in the body of the Incarnation, in His flesh, all things recognised themselves fulfilled, brought to perfection, recognised themselves as God longed for them to become. And they saw also that this was possible, because if it was possible in Christ, it was possible for all things to be pervaded with divinity, to be the dwelling place of the Holy Spirit, to become the body of the God Eternal.

And then, on one tragic day, once more humanity betrayed both God and its own vocation, rejected the Living God Who had come to save what He had created, rejected the Son of God become the son of man, and nailed Him to the cross, and killed Him. When Adam betrayed his vocation, deeply was the whole world shaken, but there was hope, there still was hope: God was there. On that day, the whole creation trembled with horror, because not only the real Adam, the true and perfect man was now dead, but God had been defeated in him. Was there any hope? There was no hope … And we can see that the powers of heaven were shaken, that the sun lost its light, that the earth trembled, darkness came down upon the world because even God had been and conquered by human hatred and blindness: nothing was left, seemingly, but death, disintegration, the end.

What wonder when, from the depths of hell, victory resounded the sound of victory, when the whole creation became aware that the Christ’s human soul had descended into hell, into the place where God was not, could not be, into the place which by definition was the place of eternal, irremediable absence; but He had come to it in the glory, the shining, the resplendence of His Godhead, and darkness was banished; the place of radical separation had become a place filled victoriously by the divine presence; hell was no longer; victory was won by God, but not only by God, because it is the human soul of Christ, the man filled with divinity that has won this victory .

And the body? The body lay in the tomb uncorrupted, because corruption could not touch this Body that was filled with divinity, even when His human soul had been torn away from it. Hope came, shy, yet exulting; the whole creation knew now that victory was won and that all things were possible, all promises would be fulfilled, all longings will be satisfied.

Only the world of man was still unaware of it. And we are today in that same holy and awesome Saturday, when the Son of God, the son of man rested from His labours. All creation knows the victory, all hell has been harrowed; now, it is for us to wait; to wait with all longing, all hope, all desire for the news to reach us, that not only hell was conquered but soul and body were reunited, that Christ the man had risen from the tomb, that all things were fulfilled, that the end had come — the end not as a point in time but as a goal attained: the vision of the perfect man united perfectly for ever with the Godhead, whose body stood not only for mankind, but for all the created, material and spiritual world. 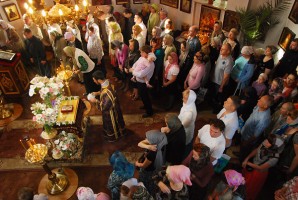 Great Saturday: Near the Sepulchre of…
Bishop Mefody of Campanie (+1974)

Brothers, many of us have probably stood near the grave of a beloved one, a relative… 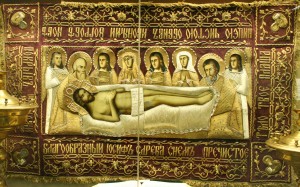 This is no place for words at that Tomb. Let our love for the Sufferer Christ…