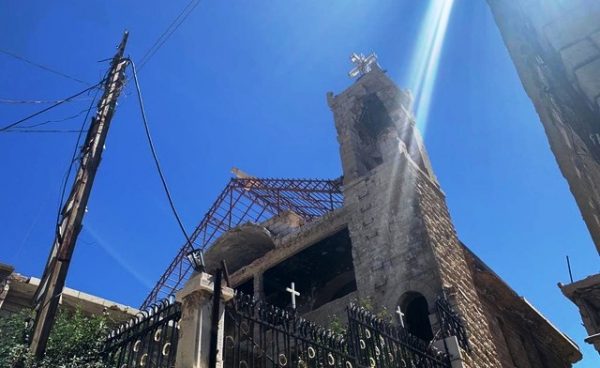 Humanitarian aid has been brought to the church of the Dormition of the Most Holy Mother of God in the city of Zabadani which is being restored with the help of Russia and the Russian Orthodox Church. In the course of a joint humanitarian action, the Center for Reconciliation of the Warring Parties in the territory of the Arab Republic of Syria and the Boyevoe Bratstvo [Combat Brotherhood], the Russian national public organization of war veterans, conveyed food packages to parishioners in need.

Besides, the church’s Sunday school received from Russian veterans sports equipment, namely, football gates, basketball baskets, ping-pong tables, balls and chess. Before the war, the school was attended by over 700 children; there were sports events, festivals and youth activities arranged for them. At present, there are only 150 schoolchildren in it.

As Dmitry Sablin, the Boyevoe Bratstvo first deputy head, noted, the church in Zabadani had always been a center of attraction for local Christians. During the war, this city, located 30 km away from Damascus, was repeatedly captured by Jabhat al-Nusra militants and Christians had to flee it. The church of the Dormition with its almost two-century-old history was looted and damaged.

At present, worship services are held in an adjacent building, but already in a month’s time, according to Metropolitan Ephraim of Seleucia, vicar of His Beatitude Patriarch of Antioch and All the East, the Orthodox people in Zabadani hope to assemble for worship in the church and by the end of the year to complete restoration work in it. ‘The aid and support of Russia are very important for us. It is a guarantee that those who had to flee from militants will come back home and that Christians will remain in their land’, the archpastor stressed.

The parish youth group told the Russian guests about their work including studies with Sunday school children. They sang Christian hymns for the guests and invited them to come for Christmas in the already restored church. Parishioners of the church of the Finding of the Holy Sepulchre in Moscow who have helped the Syrian Sunday schools in a regular basis promised to send them Christmas gifts.

Participating in the meeting were E. Kurbanov, councillor of the Russian embassy in Syria and A. Kozlenko, first secretary of the embassy, as well as the Boyevoe Bratstvo representatives, and military personnel from the Russian Center of Reconciliation in Syria.