Metropolitan Hilarion of Volokolamsk Meets with Russian Military in Syria 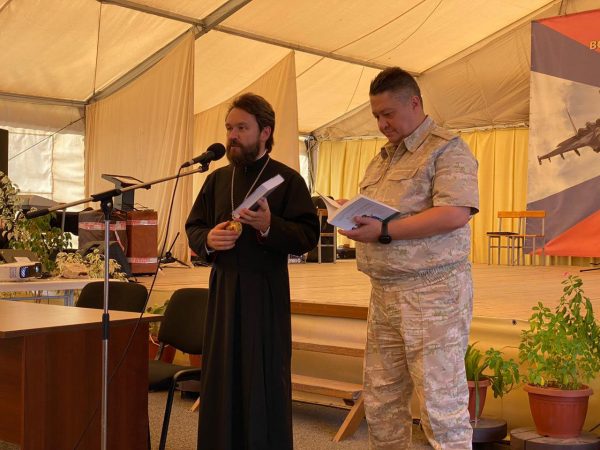 On October 22, 2020, during his working visit to Syria, Metropolitan Hilarion of Volokolamsk, head of the Moscow Patriarchate department for external church relations, visited the Damascus Representation of the Russian Orthodox Church, where he was welcomed by the rector of the representation and representative of the Patriarch of Moscow and All Russia to the Patriarchal See of Antioch, Hegumen Arseny (Sokolov). Metropolitan Hilarion familiarized himself with the progress made in building a Children’s Center under the aegis of the Russian Orthodox Church.

After that, His Eminence met at the representation with the Russian Ambassador Extraordinary and Plenipotentiary of the Russian Federation to the Syrian Arab Republic A. Yefimov. They discussed matters of mutual concern. Metropolitan Hilarion thanked the ambassador for his invariable support for the work of the Damascus Representation of the Russian Orthodox Church.

On the same day, Metropolitan Hilarion visited Russia’s Khmeimim air base where he met with its commanders and enlisted personnel. His Eminence came to the base’s chapel dedicated to the St. Prophet Elias, had a talk with the military about Christian faith and answered their questions. The commander of the Russian Federation forces in Syria, Lieutenant-General A. Chaiko presented the DECR chairman with a commemorative medal. Accompanied by the commander, the archpastor made a tour of the base’s museum in which he signed the guest book, planted a commemorative tree in the Victory Park, saw the armament and conditions of the militaries’ life.

After bidding a warm farewell to the Russian military and thanking them for the hospitality, Metropolitan Hilarion left for Moscow.

The DECR chairman was accompanied in Syria by DECR secretary for inter-Orthodox relations Archpriest Igor Yakimchuk and sub-deacon Vyacheslav Li.