Source: Express
Alix Culbertson | 08 July 2016
A 300-STRONG throng of Muslims torched a group of Christian houses in Egypt because they wanted to build a church on their own land. 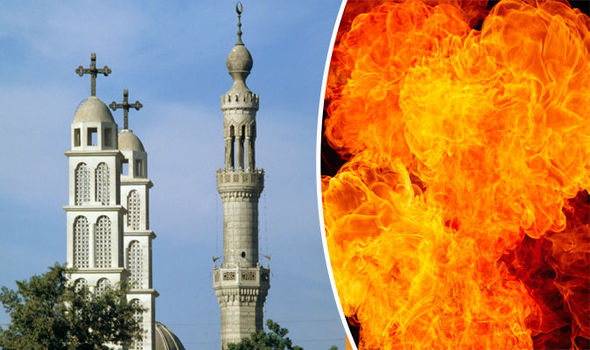 The horror attack on at least four Coptic Christian homes in the Kom el Loofy village in Samalout, Upper Egypt, happened despite the landowner, Coptic man Ashraf Khalaaf, signing papers at a police station promising he would not use his property as a place of worship.

Coptics, who belong to the oriental Orthodox family of churches, make up the majority of Christians in Egypt and northeast Africa.

They have become increasingly persecuted by Muslims, especially with the rise of Islamic State (ISIS) over the past few years.

Kiri Kankhwende, press officer for Christian Solidarity Worldwide, said: “The torching of Coptic homes in Kom El Loofy underscores once more the urgent need for Egypt’s House of Representatives to enact a law regulating the construction and renovation of houses of worship in a manner that guarantees the right of Christians to worship in community with others.

“We echo the Bishophric of Samaloot in condemning the imposition of reconciliation meetings as a replacement for the rule of law because they impose ad-hoc, unjust and often un-constitutional conditions on the victims of sectarian violence and perpetuate impunity for the perpetrators.

“Rule of law must be upheld, and must include security services nationwide serving every community without discrimination on the grounds of religion.”

Last week ISIS affiliates in Egypt claimed responsibility for the shooting and killing of Coptic Priest Raphael Mousa in the town of El-Arish.

The jihadi group said it targeted and killed the 46 year old priest for “combatting Islam”.

Earlier in June, an angry Muslim mob destroyed dozens of Coptic Christian homes and properties in the Egyptian village of Al-Beida after believing one of the buildings was set to be turned into a church.

Christians marked the one year anniversary in February of a now infamous ISIS “nation of the cross” video where 21 Coptic Christians were beheaded.

At the time, Bishop Amba Angaelos, general bishop of the Coptic Orthodox Church, said: “One profound result and gift of this horrific act is that it brought people together.

“These men paid the ultimate price, but gave us a cause to advocate for all those persecuted; they also showed us that there was a level of evil that we must all stand in solidarity against, and a level of courage, faithfulness and defiance that we must all aspire to.”