Hurrying to Wash Away the Filth of Sin

In the modern world most Christians consider a frequent and thorough confession as a very important part of the catechization and an opportunity to ask their priests questions which are essential for their spiritual growth. In practice, many people come to confession only once a year, on Holy Thursday. But if we look at ourselves honestly, repentance occurs naturally, as a necessity.
Archpriest Alexei Uminsky | 30 November 2008

They should hurry to their spiritual fathers once they have fallen; and they shouldn’t do that because of anything but their true desire to wash away the filth of sin, as it offends GOD. And at the same time they should accept a new power against themselves, in the most Holy Sacrament of Repentance and Confession. St. Nicodemus the Hagiorite 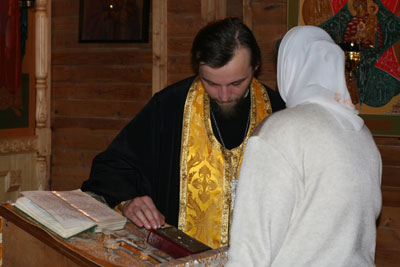 Many priests (including even Metropolitan Anthony of Sourozh) have argued against frequent confession. They believe that one may come to confess once a month, or even less often, that only in this case would repentance be truly deep, as the person would have more time to realize his sins and repent of them truly. If we agree with this point of view, we can say the same of the sacrament of the Holy Communion: infrequent communion guaranties it will be a meaningful experience. Some priests don’t let people take Communion too often, explaining that otherwise the sacrament turns into a formality. But it is hard to agree with such an opinion: communion with the God cannot be a formality, whether in the Holy sacraments or during prayer. If it becomes a formality this is not dependent on frequency but on the personal understanding of confession and participation in Liturgy. The inner spiritual life of a person is key. If sincere intentions and openness to the Spirit are present the relationship with God will never turn into a formality.

In the modern world most Christians consider a frequent and thorough confession as a very important part of the catechization and an opportunity to ask their priests questions which are essential for their spiritual growth. In practice, many people come to confession only once a year, on Holy Thursday. But if we look at ourselves honestly, repentance occurs naturally, as a necessity.

Sin is frightening and if someone can’t and doesn’t want to live with it, he confesses as soon as possible. Waiting for a whole month seems impossible. When you feel that sin has touched you, hurry to the doctor. The more time that passes, the less sensitive a soul becomes. If a person allows sin to take over and delays repentance, his heart will harden soon or later. Saint Augustine wrote that his prayer before his conversion was, “Save me Lord, but not now.” If someone feels wounded by his sin, he must hurry to confess to his spiritual father and ask for his advice.

It is probably not possible to be too repentant in one week, but we should try to be too penitent rather than the reverse.

Translated from Russian by Elena Chikisheva
Edited by Maureen E.