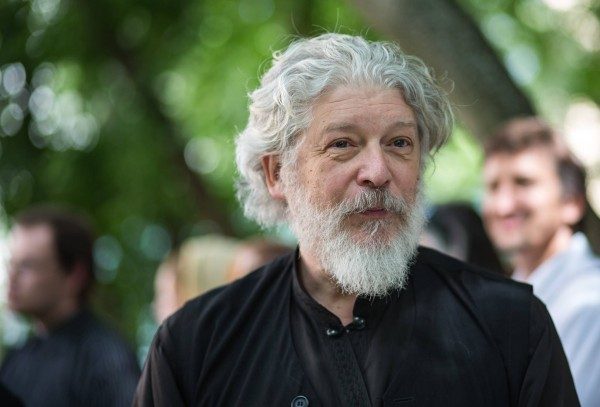 A few years ago, on the day of Pascha, I went to congratulate my spiritual father who served nearby, in the neighbouring church, on the feast of Christ’s Resurrection.  We sat down to a Paschal meal and then I went along on other business.

That year Pascha was early, but spring had already come, all the snow had melted, the sun was shining brightly, it was getting hot.  I was walking along on that quiet Moscow spring day.  It was Sunday, many people had gone to the country, Moscow was empty, evening was falling, the sun was just beginning to set.

As I came close to the church, I saw people walking past it… They all knew it was Pascha.  There were couples walking past, people wearing headphones who were chatting with beer bottles in their hands.  Not one of them so much as turned to look at the church.  Nobody cared it was Pascha.  Every one of them was oblivious to everything with their headphones on and their beer bottles in their hands.

And, there, walking a little ahead of me, I saw this homeless man.  He was carrying big dirty sacks and was covered in dirt from head to toe.  On seeing him people crossed the street, all of them looking so clean and nice.

And he walked on, walked up to the church, put his dirty things on the ground… Crossed himself and made a low bow before the doors of the church.  He then walked on.

My car was parked nearby, and the trunk was overflowing with good things, there was kulich, smoked sausage, wine that was given to me, lots of other things, whole bags of them.  I got to the car and noticed that the tramp had not gone far.  And I thought to myself, “I’ll put a few things together for him of Pascha.”

I opened the trunk and called out to him, “Hey, buddy, come here!”  He turned around, came up to me, and asked, “Do you need any help?”

The Lord Gives the Cross According to Strength