The first ever Orthodox International spiritual-academic symposium dedicated to women’s monasticism has now been held in Serbia, in the famous and ancient Zhicha Monastery, which is celebrating its eight-hundredth anniversary.

There is a proverb which is the same even across the most different of Orthodox nations: “If you want to find out if someone loves Christ, find out in he loves monasticism.” Truly, monasticism is the nervous system of the Church, Her hope and expectation. Therefore the spiritual health of the nation depends very much on the health and strength of its monasticism.

It is not surprising then that the recent symposium in Serbia was recognized as having great spiritual significance not only for the Serbian Church, but also for Universal Orthodoxy. 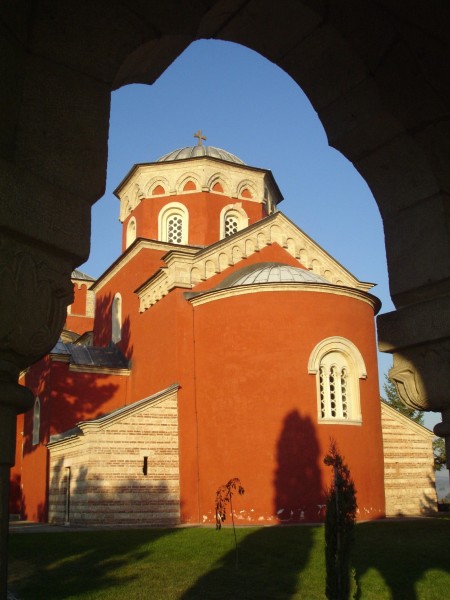 Representative from almost all of the local Orthodox Churches took part in the symposium: from Greece, Serbia, Russia, France, Georgia, Romania, Syria and other countries. Opening the symposium, His Holiness Patrirach Irenaeus of Serbia said that monasticism has been the greatest force in the Church during all eras. The greatest Christian minds were reared in monasticism. At the present time it is reviving in many countries, but is also passing through formidable temptations; and this requires discernment and conciliar thinking. 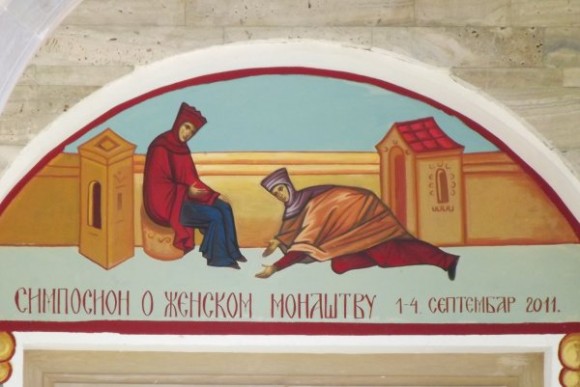 “It makes us very happy,” the Patriarch noted, “that both academics and monastics, representatives from various Orthodox Churches, are taking part in this grace-filled gathering. Thanks to this fact, we will be able to examine not only the history of Orthodox monasticism, but also its contemporary state, its problems and needs.” 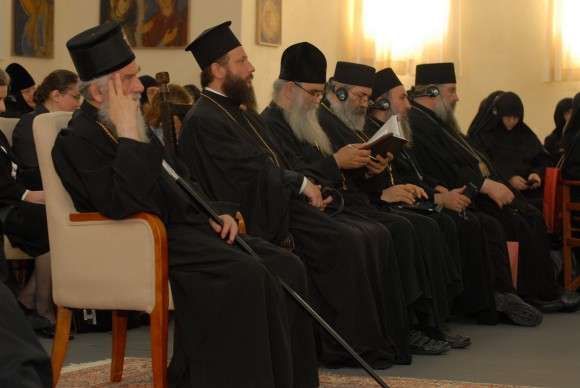 In the course of the symposium’s work the most urgent questions facing leaders and members of today’s monastic communities. The titles of the presentations and the names of the participants speak for themselves: “The Abbess as Spiritual Mother,” “The Bishop and the Church,” “The Role of the Spiritual Father and the Clergyman in a Women’s Monastery,” “Women’s Monasticism and its Pastoral Role in the Church.” … 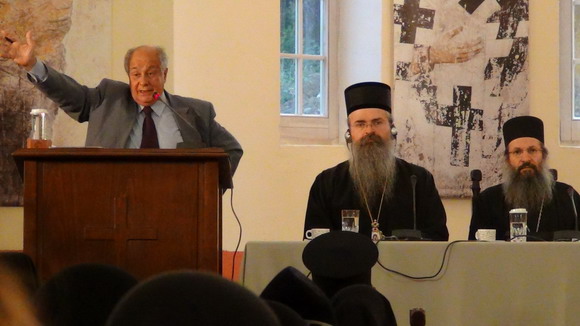 Nine hierarchs gave presentations, including Metropolitan Amphilochius of Montenegro and Primorsk, Metropolitan Afanassy of Limassol, Metropolitan Nikolai of Lavreot, Bishop Afanassy (Evtich) of Zakholmsk and Herzegovina, and others. Also presenting were seven abbots, abbesses, and spiritual fathers of monasteries, including Archimandritev Ephrem of Vatopedi, Archimandrite Elisseus of Simonopetra, Abbess Theoxenia of Chrysopighi Monastery in Crete, Archimandrite Ilia (Rago), spiritual father of a women’s monastery in France which is a dependency of Simonopetra. 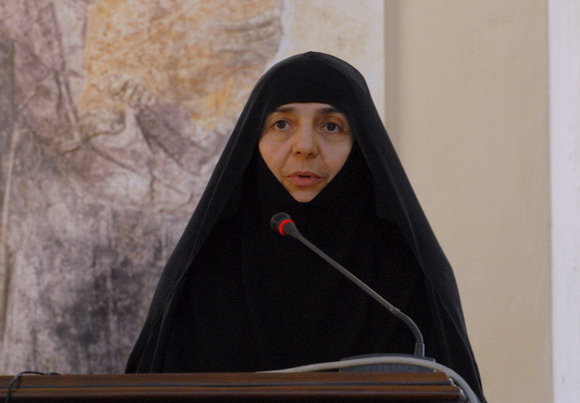 We offer an excerpt from the brilliant lecture of Bishop Nikolai of Lavreot. In response to the question of how a women’s monastery might serve the world, he established a few fundamental positions. 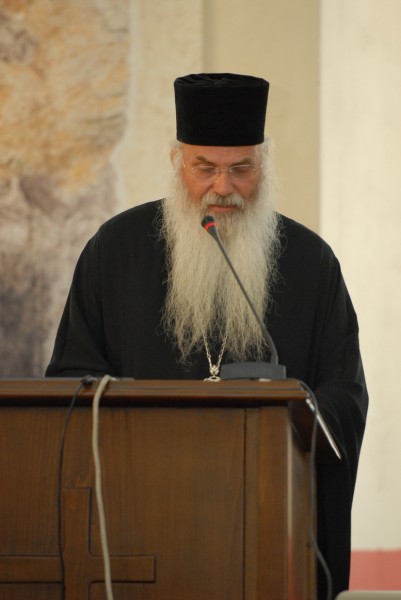 2. The life of the faithful is supported by the prayers of the monks. This is elucidated by the very fact that the faithful take refuge in such prayers. Just as Moses stretched out his hands and the Israelites conquered the Amalekites, so the monastics life up their hands to God and we, the faithful who are struggling in the wilderness of this world, conquer the noetic Amalek. 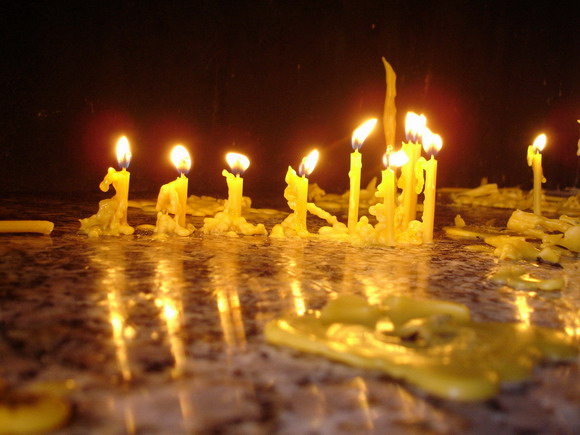 3. The third element of the monastic life that can truly benefit the struggle of the faithful is the quiet and silence of the monasteries.

In such a time in the world that is ruled by great hurry, powerful unrest, competition, many worries, uncontrollable stress, lack of certainty about tomorrow — in such a time the atmosphere of a monstery, where everything happens at its own time, according to a pre-appointed order, where the tenderness of quietude and the dialect of silence establish themselves as the natural and appropriate language of life, where life is untroubled, free from unnecessary information and mindless strivings, the greatest constancy presents itself; In place whose law says that material and bodily goods are not as absolutely necessary as the true and spiritual presence of God, where there is a waiting for the Kingdom of God — this is the most important thing in life; and so, in a such a time in the world as the one we live in, only visiting a monastery can restore the orientation of our lives and bring rest to the heart of the most disturbed man. 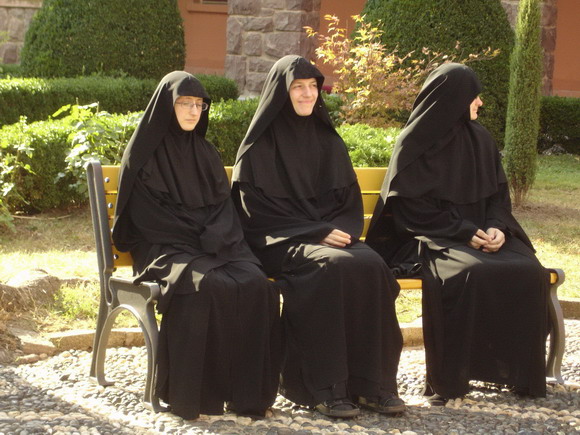 4. According to tradition, monasteries are distinguished by voluntary poverty, meekness and simplicity of life. It is true that this tradition has declined somewhat in our times. But where it exists, it gives the best answer to all the perversions of hyper-consumption and hedonistic materialism. A minimum of earthly comforts, absence of multifarious worldy ambitions, colors and subjects, a limited number of words, smiles, no tempestuous flow of joys and other feelings, always one and the same order of actions — all this establishes very fine borders for life, exclusively estranged from agitation of the feelings.

This is encountered rarely today and offers a special kind of rest. There is not enough of this is today’s way of life, so that every visit to a monastery affords a man rare relaxation and a spiritual foothold: silence of the feelings awakens the inner activity of the soul. Communication with the world works in the opposite way: it awakens external feelings, while deadening the inner ones. The atmosphere of life in a monastery awakens the inner world and gives vigor to the nature of man. 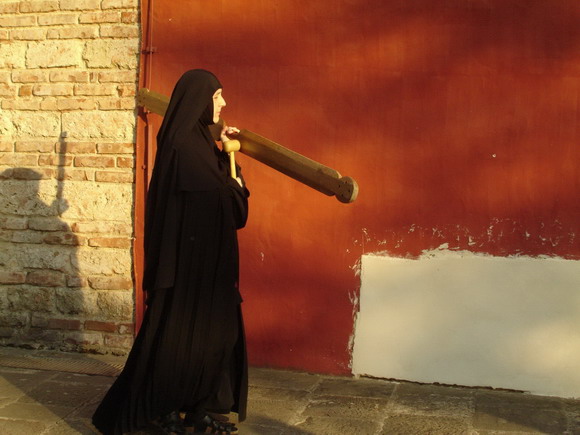 5. Monastic life is founded on the renunciation of the world, and so presents itself as the renunciation of nature for the sake of surpassing it, in order to find what is above nature. In other words, monasticism contains in itself a deep element of exalted heroism, of real, genuine life. At the same time, the more estranged one is from this world, the more he is able to help this world.

A monk knows the secrets of the human soul, the activity of the passions and the image of the activity of the grace of God, the mysteries and difficulty of the spiritual path. The monk is one has himself struggled and learned much. He is the best psychologist. He understands the weak, the antagonistic, the grieved, the burdened and the betrayed, the hungry and the thirsty, the persecuted and unjustly insulted. Is this not the work of a pastor?

One of the most impressive and memorable moments of the symposium was the discussion, when all of the participants were able to ask their interesting questions. Some of these, briefly, were: How can we struggle against the contentious quality of the feminine psychology? How can we avoid excessive attachment to the spiritual father? How should we relate to a pyschological ill person in the brotherhood or sisterhood? 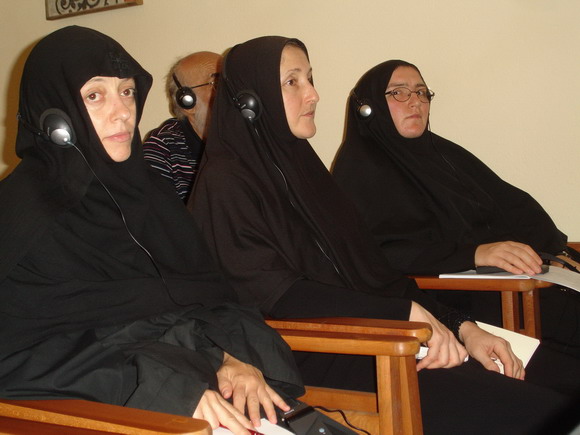 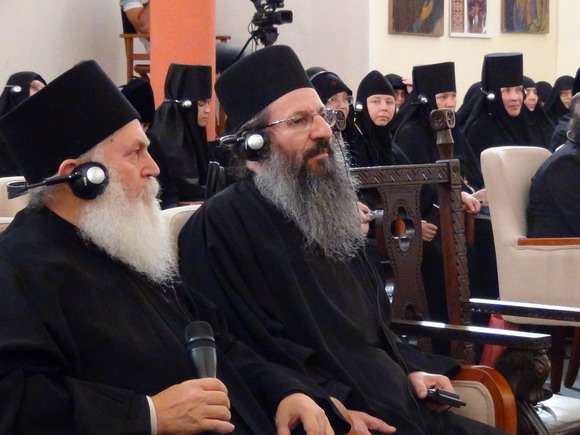 We present to you a few more photographs of the symposium at Zhicha in Serbia. 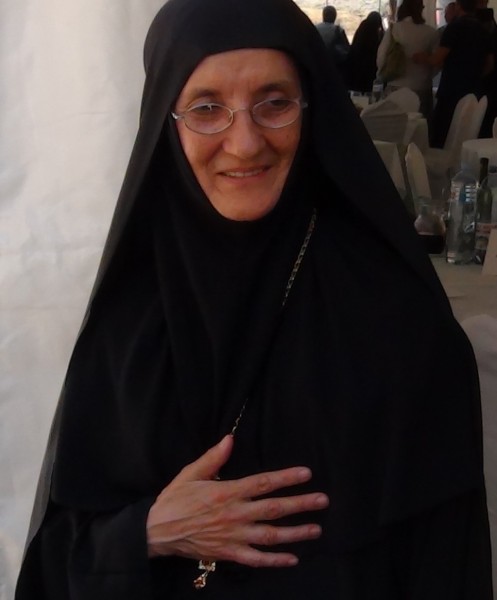 Zhicha Monastery, founded at the beginning of the thirteenth century by Stefan the First-crowned and St. Sabbas the Serb. The monastery suffered under the Turkish yoke, during World War II, and during the NATO bombings of 1999. Nevertheless, today the Zhicha monastery is one of the strongest in Serbia, inhabited by forty-five people. 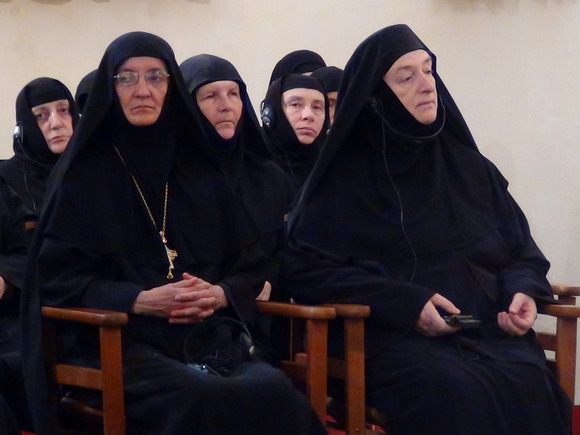 Abbess Nikodima is the head of Ormilia Monastery in Greece, a dependency of Simonopetra on Athos. 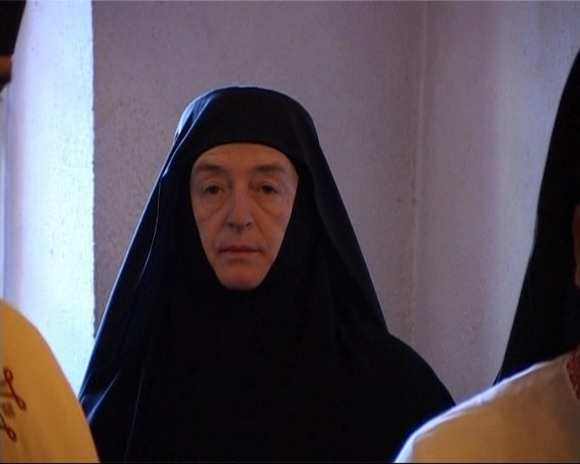 Thanks to the labors of Abbess Nikodima and the joyfully ascetical life of her sisterhood, the lives of many women’s monasteries have been renewed, both in Greece itself and in other countries. 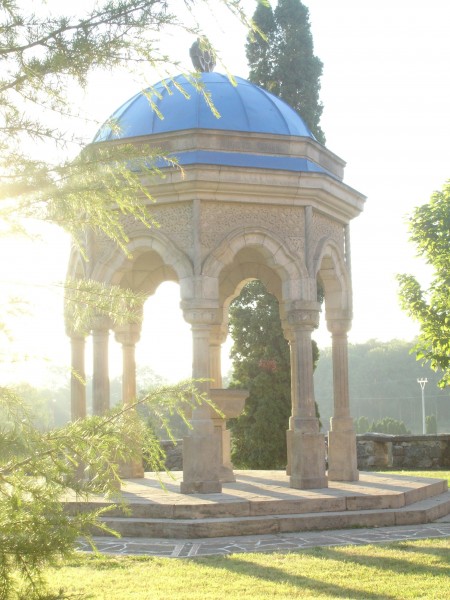 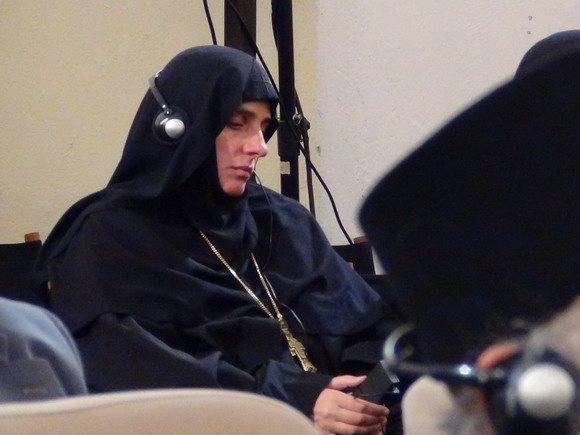 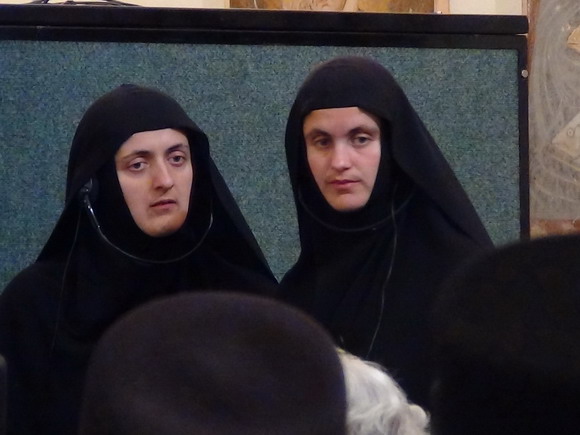 The divine services, served in the ancient Zhicha church, left a especially deep impression upon all the participants in the symposium. 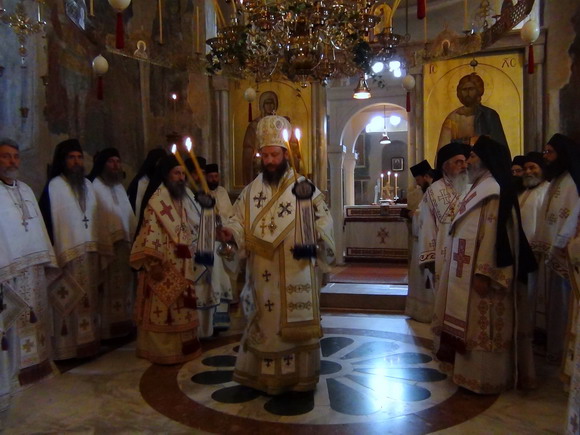 The venerable hierarchs and abbots, giving exclamations in various languages and styles of chant, the ancient frescos — all of this gave a feeling of universal Orthodoxy here and now, in our life. 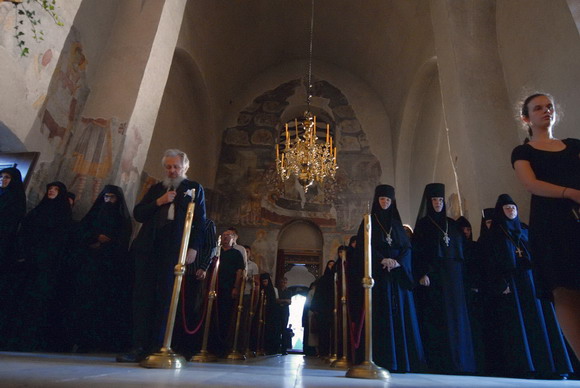 And this spiritual unity, salted with common prayer, made even a greater impression that all of the lectures and discussions. 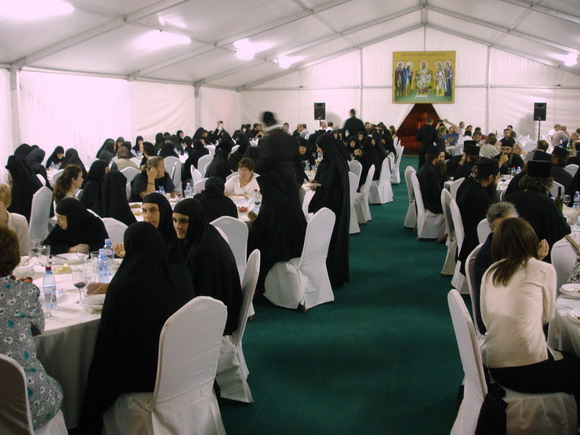 A common table was set for three-hundred people. On the tables were nametags written in four languages. 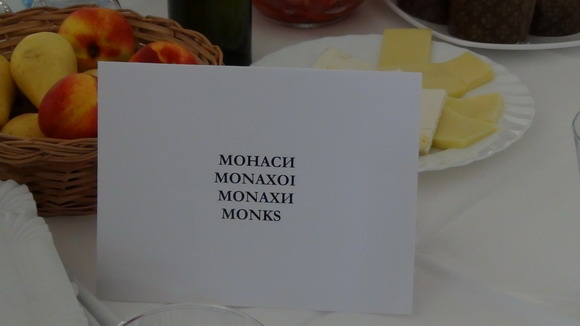 Prayers before and after the meal were also said or sung in various languages: Serbian, Greek, Russian, English. Participants from Romania, Syria and France were united in a language known to them all. 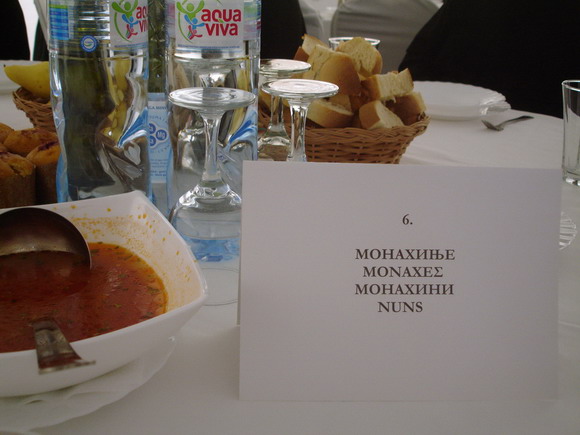 Simultaneous translation was done in four languages. There were booths in the conference hall for translators, who reacted immediately to all the lectures. For example, one kind-hearted and pious Serb who was translating for the Russian participants, at the end of a certain difficult lecture, commented exhaustedly: “It would be good if they all spoke Russian, so that it would be easy to translate.” 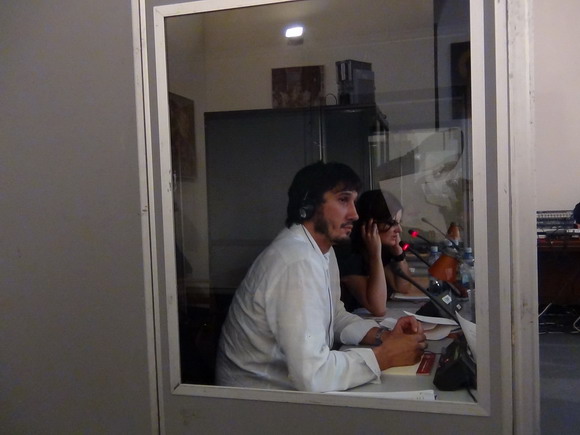 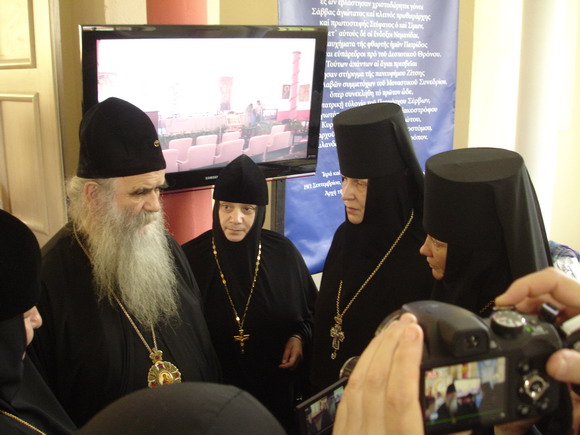 The Russian Delegation with Metropolitan Amphilochius of Montenegro and Primorsk 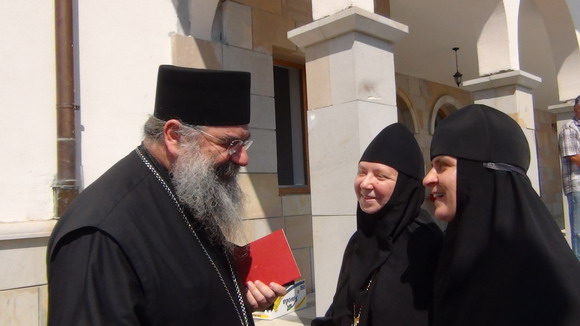 The heads of the Russian monasteries tried to converse with the lecturers between sessions, to ask for their prayers and edification.

Translated from Russian by Jeremy Boor.