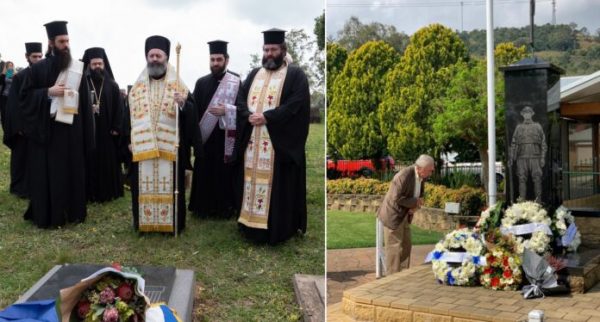 On Saturday, September 19, the National Committee of the Archdiocese of Australia inaugurated the 200th anniversary of the Greek Revolution of 1821 in Picton, New South Wales.

The program of celebrations will cover a period of about 15 months until the end of 2021. On Saturday, all events were dedicated to the emblematic figure of Andonis Manolis, who was one of the first two Greeks to adopt Australia as their homeland.

The first phase of the action began at noon with a Trisagion Service performed at the tomb of Antonis Manolis by His Eminence Archbishop Makarios. It continued at 12:30 with the unveiling by the Mayor of Wollondilly, Mr. Robert Khan, marking the street in the name of Antonis Manolis.

The service ended at the Picton War Memorial with the laying of wreaths by members of the Greek Australian community.

The second phase of the ceremony took place at a restaurant in Picton, where around 60 people, abiding by Covid restrictions, attended a meal and heard a speech by the expatriate historian Dr. Panagiotis Diamantis.

At the same time, ceremonial greetings were made, with the Minister Mr. Taylor and the Municipal Councillor of Wollondilly Mr. Michael Banasik emphasising specific incidents with which their life has been impacted by Greeks and their activity in Australia. The Greek Orthodox Archdiocese recognsies that the whole event symbolised the significance of the 200th anniversary of the Greek Revolution for the wider Australian society.