Source: DECR
While in Damascus, the humanitarian delegation came under bombardment by terrorists, which continued for two days, targeting the places visited by the Russian delegation.
Natalya Mihailova | 10 February 2018 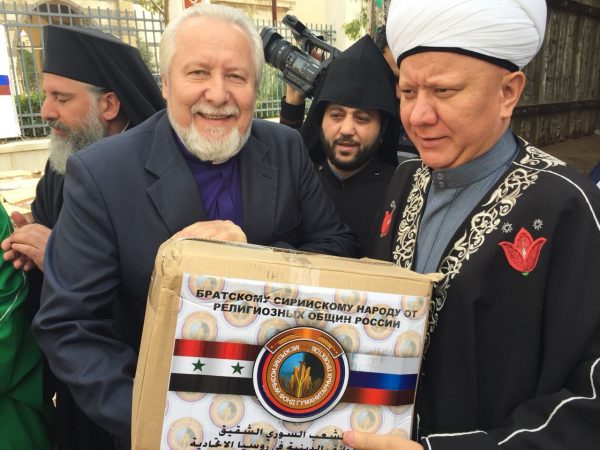 On 9 February 2018, the delegation of the Interreligious working group of Russia’s Presidental Council for Cooperation with Religious Organizations completed its visit to Syria and Lebanon.

As part of the visit, a humanitarian action was carried out with the view of rendering assistance to the Syrian people. It was unprecedented in the amount of aid distributed at a time. Besides, it was the first visit to Syria of an interreligious delegation of such level, which included representatives of major Christian and Muslim communities of Russia.

The action was carried out with the blessing of His Holiness Patriarch Kirill of Moscow and All Russia. His Holiness himself, who supervises the project, made a large contribution.

The idea to establish an interreligious working group for rendering aid to the Syrian people belongs to Metropolitan Hilarion of Volokolamsk, under whose general supervision the action was carried out. The decision to set up the working group was taken at a meeting of the Commission for International Cooperation of the Presidential Council for Cooperation with Religious Organizations on February 21, 2017.

The overall weight of the distributed aid was 77 tonnes. It included essential foodstuffs, such as flour, sugar, cereals, pasta, sunflower-seed oil, powdered milk, and canned fish and meat. The foodstuffs were packed in boxes, over 25 kilos each, intended for one family. As is estimated by the Syrian side, such consignment will be sufficient for a family of 3-4 people for at least two weeks. In all, three thousand boxes were packed and distributed. The delegation also brought to Syria the Russian-made chocolate and sweets which they gave out to children. The aid was distributed at 11 sites in Damascus, and at three sites in the Beqaa Valley in Lebanon. At the request of the Grand Mufti of Syria, Ahmad Badreddin Hassoun, one of the consignments was delivered to Aleppo.

The humanitarian action was organized and carried out by the leaders of both Christian and Muslim communities of Syria and Lebanon. It was distributed by the local Christian and Muslim clergy and by the delegates from Russia. Among those who received the aid were the neediest people who were brought together for that purpose at religious centres in Damascus and Zahlé, as well as child welfare institutions.

During their visit, the delegation members met with religious leaders and representatives of state authorities of Syria and Lebanon. The Syrians noted that the action was unprecedented and expressed their sincere gratitude to the Russian state and to the believers who raised the funds, as well as to the Russian Orthodox Church as its main organizer and to His Holiness Patriarch Kirill of Moscow and All Russia as the initiator and supervisor of the project. 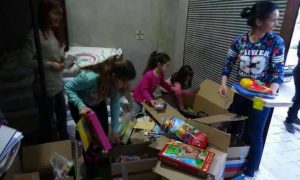 Over 3.5 tons of aid including medicines, food stuffs, school stationary and toys, as well as…

Most viewed articles
First Church in the Antiochian Archdiocese Named for St. Xenia of St. Petersburg Prepares for Feast Day284
Patriarch Kirill: Not Only People, But Churches Too, Can Depart from God161
My World’s Different104
Patriarch Porfirije of the Serbia: Our Position on the Church Issue in Ukraine Has Not Changed89
Brooklyn Street Co-Named for Antiochian Pastor Who Served a Half Century There86
Thoughts on Theophany and Revelation76
Metropolitan Hilarion: the Church and traditional confessions have done everything possible to improve the situation in Kazakhstan71
A Christianity of the Catacombs68
Archbishop Makarios of Australia: ” the Great privilege of the Orthodox Church is that we live in communion”21
4-400×6001
Most popular authors
Pravmir.com team626
Protopresbyter Themistoklis Mourtzanos104
Peter Samore86
Elissa Bjeletich76
Archpriest Lawrence Farley68