Metropolitan Hilarion Speaks at Opening of Interreligious Forum in Madrid 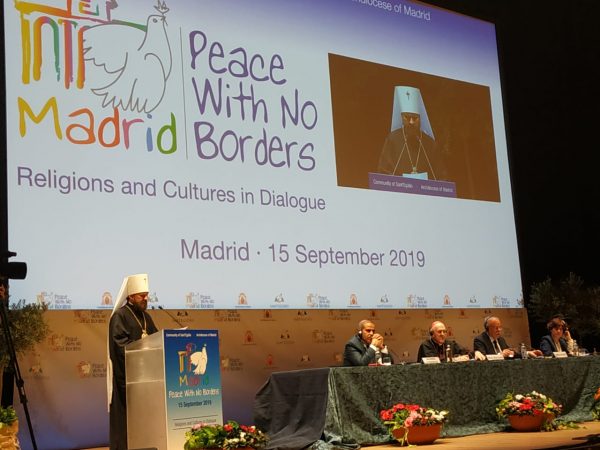 On September 15, 2019, Metropolitan Hilarion of Volokolamsk, head of the Moscow Patriarchate department for external church relations (DECR), spoke at the solemn opening of the Peace Without Borders. Religions and Cultures in Dialogue forum at the Palace of Congresses. The forum was organized by the Catholic Sant’Egidio Community.

With a blessing of Patriarch Kirill of Moscow and All Russia, the DECR chairman is heading the Russian Orthodox Church’s delegation to the forum, which includes Metropolitan Nikodim of Zhitomir and Novograd-Volynsky, Archbishop Nestor of Madrid and Lisbon, Bishop Anthony of Slutsk and Solikamsk; Archpriest Nikolah Danilevich, deputy head of the Ukrainian Orthodox Church’s DECR; and Hieromonk Stehan (Igumnov), Moscow Patriarchate’s DECR secretary for inter-Christian relations.

A message of greetings from Pope Francis of Rome was read out at the opening of the forum. Addressing the gathering, Prof. A. Riccardi, the founder of Sant’Egidio Community, made a special mention of Metropolitan Hilarion and his delegation and thanked them for their participation in the forum.

In his speech, Metropolitan Hilarion said in particular, “The great ascetic of the Russian Orthodox Church, St. Seraphim of Sarov, admonished his spiritual children with words: ‘Seek the spirit of peace and thousands around your will be saved’. The profundity of these words is such that in each new epoch their truth sounds with a new force. They seem to be said for our time as well, marked as it is with numerous conflicts, wars, terror actions, social injustice and a global ecological crisis. In the admonition of St. Seraphim, who continued the tradition of Christian asceticism, there is a profound truth: a transformation of the world around us begins with a transformation of our inner world’.

His Eminence noted that history ‘knows of numerous examples of attempts at a radical re-ordering of society that, as a rule, brought about violence, hate and civil confrontation. They failed precisely because, in an attempt to change society, one did not seek to change oneself and was motivated by the spirit of strife, not peace. Regrettably, in our days, we become witnesses of the escalation of violence covered up with religious slogans’.

Metropolitan stressed that ‘the Sant’Egidio Community is one of the vivid examples of the service of peace in our time; each year it organizes an international meeting of high-ranking representatives of various Christian Churches and other religions and political and cultural figures with the aim to build bridges between people of different beliefs and cultures for the sake of putting an end to enmity and establishing a lasting and beneficial peace’. Speaking about how people of different religions may unite their efforts for achieving peace and healing wounds inflicted by war, the archpastor referred to the Interreligious Working Group for Humanitarian Aid to the Syrian Population, ‘in which not only Christians of various confessions but also Muslims are working side by side. Through the work of this group, devastated by war Syrians of different faiths receive the necessary aid. This cooperation has become a school of peace for all its participants because it teaches people to overcome their egoism and to open their hearts to others’.

In conclusion of his speech, Metropolitan Hilarion cited the Joint Declaration of Pope Francis and Patriarch Kirill: ‘We exhort all Christians and all believers of God to pray fervently to the providential Creator of the world to protect His creation from destruction and not permit a new world war. In order to ensure a solid and enduring peace, specific efforts must be undertaken to rediscover the common values uniting us, based on the Gospel of our Lord Jesus Christ (11)’.

Present in the hall were numerous guests and participants representing Spanish state leaders and public, as well as bishops and clergy of Local Orthodox Churches, the Roman Catholic Church and Oriental Churches and representatives of Islam, Buddhism, Judaism and other religions from many countries of the world.