Source: The New York Times
Alissa J. Rubin | 20 July 2014
BAGHDAD — By 1 p.m. on Friday almost every Christian in Mosul had heard the Sunni militants’ message — they had until noon Saturday to leave the city. 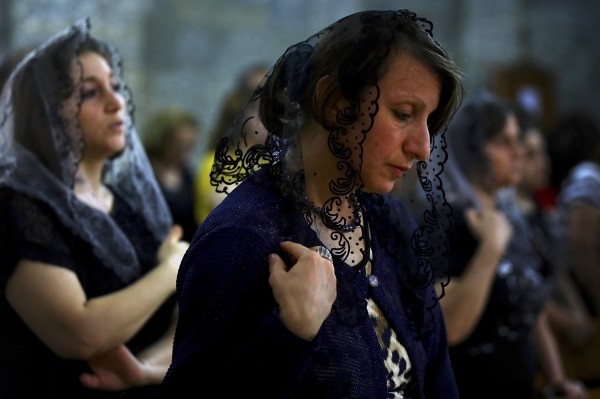 Iraqis attending Mass in June at a church in Al Qosh, where many Christians have fled after being intimidated into leaving their homes in Mosul. Credit Associated Press

BAGHDAD — By 1 p.m. on Friday almost every Christian in Mosul had heard the Sunni militants’ message — they had until noon Saturday to leave the city.

Men, women and children piled into neighbors’ cars, some begged for rides to the city limits and hoped to get taxis to the nearest Christian villages. They took nothing more than the clothes on their backs, according to several who were reached late Friday.

The order from the Islamic State in Iraq and Syria came after Christians decided not to attend a meeting that ISIS had arranged for Thursday night to discuss their status.

“We were so afraid to go,” said Duraid Hikmat, an expert on minorities who had done research for years in Mosul. He fled two weeks ago to Al Qosh, a largely Christian town barely an hour away, but his extended family left on Friday.

Since 2003, when Saddam Hussein was ousted, Mosul’s Christians, one of the oldest communities of its kind in the world, had seen their numbers dwindle from over 30,000 to just a few thousand, but once ISIS swept into the city in early June, there were reports that the remaining Christians had fled.

Interviews on Friday with Christian elders and leaders suggest that in fact many had hung on, hoping for an accommodation, a way to continue the quiet practice of their faith in the city that had been their home for more than 1,700 years. Chaldeans, Assyrians and other sects, including Mandeans, whose Christianity is close to that of the Gnostics, could still be found in Iraq, and many made their home on the plains of Nineveh in the north of the country, an area mentioned in the Bible’s Book of Genesis.

Friday’s edict, however, was probably the real end. While a few scattered souls may find a way to stay in secret, the community will be gone.

A YouTube video shows ISIS taking sledgehammers to the tomb of Jonah, something that was also confirmed by Mr. Hikmat. The militants also removed the cross from St. Ephrem’s Cathedral, the seat of the Syriac Orthodox archdiocese in Mosul, and put up the black ISIS flag in its place. They also destroyed a statue of the Virgin Mary, according to Ghazwan Ilyas, the head of the Chaldean Culture Society in Mosul, who spoke by telephone on Thursday from Mosul but seemed to have left on Friday.

“They did not destroy the churches, but they killed us when they removed the cross, this is death for us,” he said.

Christians are among several minorities who are being systematically expelled or killed by ISIS, according to a United Nations report on civilian casualties in Iraq released on Friday.

Among them are Yazidis, a tiny sect that has survived for centuries and whose theology fuses elements of Islam, Christianity and Zoroastrianism; Shabaks, who are often described as Shiites whose language is close to Persian and who take beliefs from different traditions; and Shiite Turkmen.

The Yazidis and the Shabaks are being persecuted in the Sinjar area west of Mosul, according to the United Nations and interviews with members of both communities. The United Nations has documented scores of abductions and killings as well as the destruction of shrines.