Jerusalem Patriarch Expresses Solidarity with the Head of the Canonical UOC 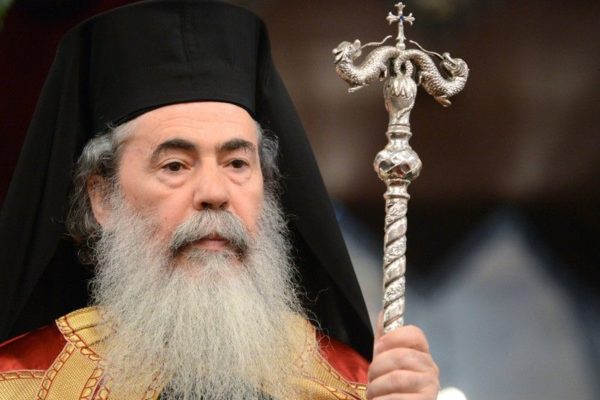 Patriarch Theophilus III of Jerusalem urges Ukrainian believers to stand by Metropolitan Onufry of Kiev and All Ukraine.

“We pray for our brother – His Beatitude Metropolitan Onufry and suffering people of Ukraine (…) Stand by your Primate, you should not only find reconciliation in his prayers, but also be his aides and companions in prayers, follow his example of firm faith,” the Patriarch said at his meeting with the UOC delegation headed by Metropolitan Luka of Zaporozhye and Melitopol, press service of the Zaporozhye Diocese reports.

According to Patriarch Theophilus, recent events around church life in Ukraine is one of manifestations of globalization, which “main goal is to destroy the Orthodox Church,” he believes.

At the same time he noted that “in spite of the difficulties” Orthodox nations “should not give up hope.”

As it was reported, the Patriarchate of Constantinople appointed two exarchs in Kiev as part of preparations to grant autocephaly to the Orthodox Church in Ukraine. Such was Constantinople’s response to the request by President Petro Poroshenko to issue a tomos for the creation of the united local church in Ukraine.