“Jesus and the Geese at Christmas”

Unfortunately it is not only Moslems and Jews that have difficulty understanding the concept of the Incarnation and the birth of the Son of God, but many of our own fellow Christians struggle with this reality as well. For many, Santa Claus is an easier idea to deal with at Christmas.
Archpriest John S. Bakas | 02 January 2012

I teach one class per semester at the Loyola Marymount University School of Theology. In the fall I teach a course on Orthodox Christian Spirituality. I start and end my class with prayer since prayer is the essence of Orthodox spirituality.

I don’t insist that anyone pray along with me, but I do insist that all stand as a sign of respect. I have professed atheists in class as well as Christians of various denominations, Jews and Moslems. Moslems in particular have difficulty understanding not only the Holy Trinity, but the idea of Jesus Christ as the eternal uncreated Incarnate Son of God and the second person of the Holy Trinity. Jesus Christ came into the world as God-Man (Theantropos) to save humanity from death by He Himself suffering death and being resurrected from the dead. Because He became one of us, we too may conquer death through Him and be reconciled to God the Father. Jesus Christ, I tell them, assumed the whole of man; for what is not assumed cannot be saved, whereas what is united with God is saved.

Unfortunately it is not only Moslems and Jews that have difficulty understanding the concept of the Incarnation and the birth of the Son of God, but many of our own fellow Christians struggle with this reality as well. For many, Santa Claus is an easier idea to deal with at Christmas.

So, I shared the following story with my students to hopefully shed some light of understanding of God’s love for us by becoming man to save us from our confusion and alienation.

There was once a man who didn’t believe in God, and he didn’t hesitate to let others know how he felt about religion and religious holidays. His wife, however, did believe, and she raised their children to also have faith in Jesus Christ the only begotten Son of God, despite his disparaging comments.

One snowy and windy Christmas day, his wife was taking their children to church in the farm community in which they lived. 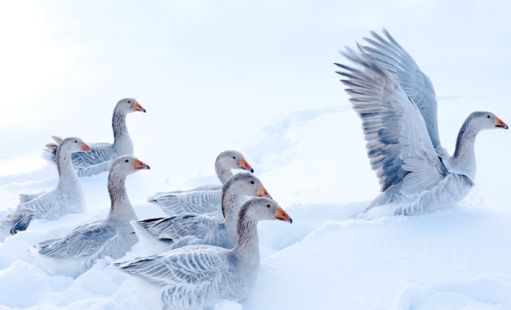 They were to talk about Jesus’ birth. She asked him to come, but he refused. “That story is nonsense!” he said. “Why would God lower Himself to come to Earth as a man? That’s ridiculous!” So she and the children left, and he stayed home. A while later, the winds grew stronger and the snow turned into a blizzard. As the man looked out the window all he saw was a blinding snowstorm.

Then he heard a loud thump. Something had hit the window. He looked out, but couldn’t see more than a few feet. When the snow let up a little, he ventured outside to see what could have been beating on his window. In the field near his house he saw a flock of wild geese. They were flying south for the winter when they got caught in the snowstorm.

They were just lost and stranded on his farm with no food or shelter, just flapping flapping their wings and flying around in low circles, blindly and aimlessly.

The man felt sorry for the geese and wanted to help them. The barn would be a great place for them to stay, he thought. It’s warm and safe; surely they could spend the day and wait out the storm. So he walked over to the barn and opened the doors wide, then watched and waited, hoping they would notice the open barn and go inside. But the geese just fluttered around aimlessly and didn’t seem to notice the barn or realize what it could mean for them. The man tried to get their attention, but that just seemed to scare them and they moved further away. He went into the house and came with some bread, broke it up, and made a bread crumb trail leading to the barn. They still didn’t catch on.

He was getting frustrated. He got behind them and tried to shoo them toward the barn, but they only became more frightened and scattered in every direction except toward the barn.

Nothing he did could get them to go into the barn where they would be warm and safe. “Why don’t they follow me?!” he exclaimed. “Can’t they see this is the only place where they can survive the storm?” He thought for a moment and realized that they just wouldn’t follow a human. “If only I were a goose, then I could save them,” he said out loud.

Then he had an idea. He went into the barn, got one of his own geese, and carried it in his arms as he circled around behind the flock of wild geese. He then released it. His goose flew through the flock and straight into the barn—and one by one, the other geese followed it to safety. He stood silently for a moment as the words he has spoken a few minutes earlier replayed in his mind: “If only I were a goose, then I could save them!” Then he thought about what he had said to his wife earlier. “Why would God want to be like us? That’s ridiculous!”

Suddenly it all made sense. That is what God had done. We were like the geese…blind, lost, perishing. God had His Son become like us so He could show us the way and save us from the storm of sin and self-destruction.

As the winds and blinding snow died down, his soul became quiet as he pondered this wonderful thought. Suddenly he understood why Christ had come. He now understood Christmas. Years of doubt and disbelief vanished with the passing storm. He fell to his knees in the snow, and prayed his first prayer:

“Thank you, God, for coming in human form to get me out of the storm!” Indeed nothing is voiceless in the world. God hears always in all created beings His echo and His Voice.

Years ago, the Partnership for a Drug-Free America launched an anti-narcotics campaign with a simple but compelling, television…

I Think I’m Burned Out

A fellow priest called me the other day and invited me to lunch away from his parish. After…