The Orthodox were supported by Muslims and Catholics.
Pravmir.com team | 24 February 2020 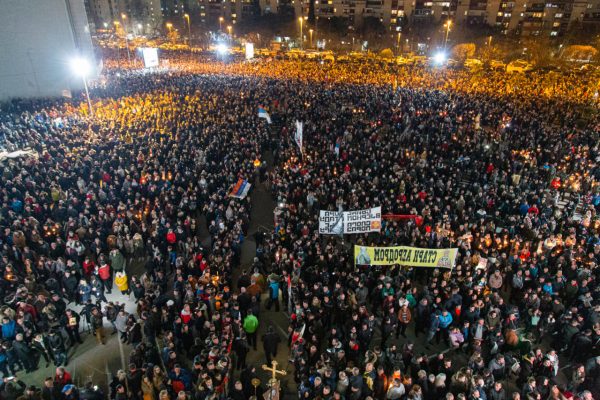 About 70 thousand people took part in the procession and prayer in defense of the Serbian Orthodox Church on the square in front of the Church dedicated to the Resurrection of Christ in Podgorica, the capital of Montenegro, on February 23, 2020. This event became the largest gathering of believers against the law on religious freedom adopted by the Montenegrin parliament last year, Ria.ru reports.

“On Sunday, a record was set in Podgorica. The plateau in front of the church with an area of ​​20 thousand square meters was already completely occupied by people, when the tail of the procession only approached the church. The clergy estimated that about 70 thousand people had gathered. Archpriest Nikola Peyovic said that Muslims and Catholics also participated in the gathering, and the procession in Podgorica “has become the largest so far,” the report said.

The prayer and procession was led by Archimandrite Sava Janich, Abbot of the Visoki Decani Monastery in Kosovo and Metohija.

“Protecting the shrines, dear brothers and sisters, we protect our homes, our families, our name, our language, our dignity, and all that makes us who we are. Therefore, our shrines are so important for us, not only in Kosovo and Metohija, but also here – in Montenegro,” the clergyman told the audience.

Another record on Sunday, February 23, was set by Novak Markovic from the mountain village of Brezoevitsa in northern Montenegro: the 99-year-old elder led a 15-kilometer procession to the village of Murino.

It was reported before that in December 2019, the Parliament of Montenegro (Skupschina) adopted a draft law “On Freedom of Religion and Belief and the Legal Status of Religious Communities”, which infringes on the interests of the Serbian Orthodox Church. The adoption of this law provoked a protest of Orthodox Christians: every Sunday and Thursday, believers in different cities of the country go to prayers and processions. The police will not divulge the total number of participants or data by region. According to opposition estimates, about 200 thousand people participated in the latest peaceful actions, with the population of Montenegro about 630 thousand.