Learning the Christian Life From Martyrs and Monks

This year, with the blessing of His Holiness, Patriarch Kirill of Moscow and All Russia, the Feast of the Holy Forty Martyrs of Sebastia has been transferred to Saturday. 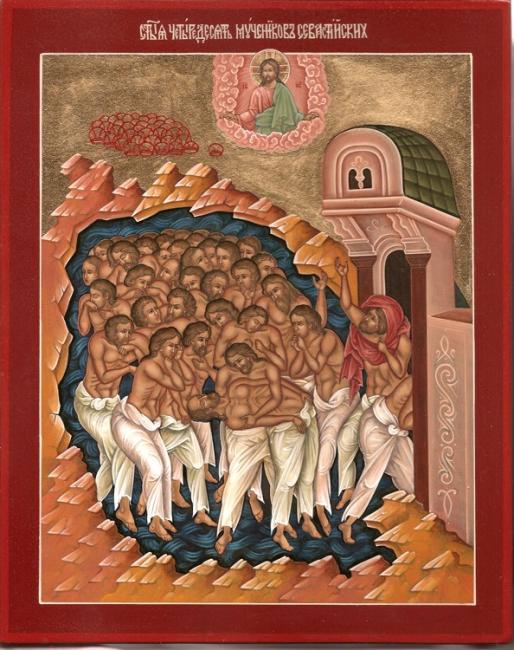 Today the Holy Church celebrates the memory of holy martyrs. There is nothing unusual in this, given that nearly every day the Church commemorates the struggle of martyrs, both new and ancient. It would seem that torture, death, and killing are terrible things, but the memory of martyrs is always a feast. Martyrdom is true victory over death; it is evidence of the Resurrection.

St. Ephraim the Syrian writes: “With shame did the enemy say with his powers: ‘I fear and quail at this blood shed for the Name of Jesus of Nazareth, for they urged one another to die for Him. Their smoldering blood has cast a gloom over me; I do not have the strength to withstand the unanimity of Christ’s disciples. It would be much better for me not to raise kings over them, for their blood pursues me everywhere.’ And the stronghold of the enemy’s cunning did collapse.”

The Holy Fathers compare Christian life, the monastic life, and the following of the commandments of the Gospel in general, with martyrdom. This martyrdom consists of self-renunciation, denial one’s own will, and crucifying oneself to Christ. We who are negligent can take the Elders as examples: the Holy Elders of Optina offer us astonishing and ever vital examples. But, by God’s mercy, there are such examples even among our contemporaries, among people living among us. I would like to read a description of the true monk: 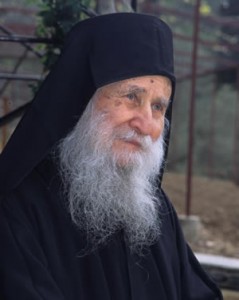 “The light radiating from the true monk contains the force of revelation. With him (the true monk) you feel infinitely calm and serious, filled with light, and your confusion is wordlessly resolved. You love Christ and life; you do not fear death. Such monks – unknown, nameless, full of light – still exist. I know one of them. He shines and overflows: such words express the truth about him to a certain extent. He contains this inexpressible joy within an earthen vessel, small and fragile, from which flows a joy that fills everything around him.

“He easily lives everywhere and in all conditions, in a special and unique manner. He finds his home everywhere, for he always burns with love for others. Wherever he sets foot, he finds solid ground, for he steps back to allow others to pass before him. He always expresses himself as needed and finds the right words, for he has never lied to anyone, never hurt anyone, and never set foot on any creature, but has consoled the wounds and pain of the entire world.”

These are the words of a contemporary teacher of monasticism, an Athonite Elder. [1] When I first read these lines, it seemed to me that I knew this monk, that I recognized him. A true monk, radiating light…

One of the guards watching over the Martyrs of Sebastia, seeing the crowns and the radiance of these still living but already holy martyrs, left his post and his service to the pagan world to join the ranks of martyrs. He perished, crowned along with them.

The turnabout that took place in this guard is astonishing. After all, he had not been baptized; he likely had not read the Gospel, and certainly not other Christian books. He had never entered a Eucharistic gathering; he did not know any prayers. He only observed the struggle of the holy martyrs. He was likely astonished by what he saw. His soul was reborn by contemplating their struggle and his heart began to waver. The Lord came to his assistance: He showed him the glory and crowns that these men received.

Many people today, too, seeing the light of the true monk – and not words and arguments of beauty and strength – leave the service of the pagan idols of this world and join the ranks of Christ’s followers.

This same Athonite Elder describes the true monk as follows:

“When you stand before him, you feel that the ancient saints are indeed alive, just as he, ancient and dead to the world, lives with us in a different manner, in the Holy Spirit. He thereby witnesses that he will never leave us. Before him you feel that you have arrived at the dread day of judgment, that you are being judged. You are judged by his love, of which you are unworthy, by his grandeur, by his pure eyes, which do not condemn you. You feel what God’s judgment will be like. You feel how the immortality of the soul is understood by Christianity, of what the resurrection of the body will be like.”

Examples play a very important role in the Christian life. The entire spiritual life is built on examples that serve as landmarks for us. But it is difficult even to imagine how difficult it is to be a living example or landmark: such a person attracts the gaze of those striving to model their spiritual lives on his. But all the arrows of the adversary, all hatred for goodness and piety, are likewise directed against him.

Just as we prayerfully turn to God’s saints for their help and intercession, so does the true monk and Elder, who bears his ministry to God and God’s people, need our prayers for his ministry. It is likely that we often forget about this, just as children, accustomed to their parents’ help, forget that their parents also need help and support.

In this manner, through our prayer and true, meek love – which does not interfere and inhibit, but rather helps and supports – we can be of some help, making our small contribution to the great ministry of the Elder and true monk. Amen.