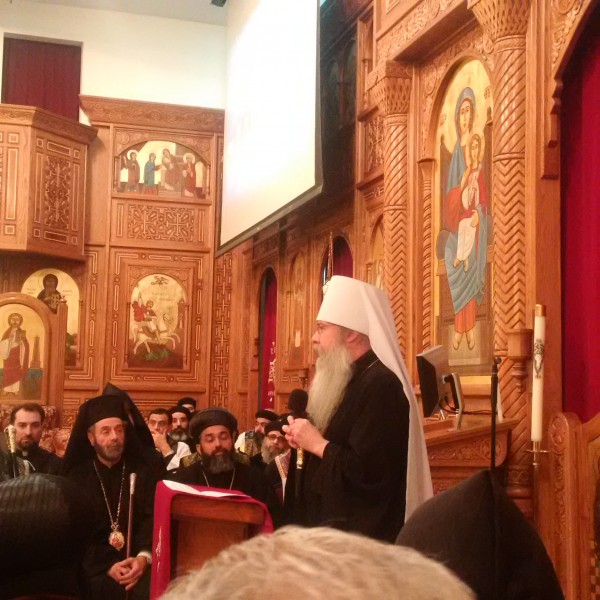 Your Eminences and Your Graces—especially Your Grace, Bishop David—and all the clergy and faithful of the Coptic Orthodox Diocese of New York and New England:

It is with sorrow and yet with hope that we gather this evening to bear witness to the martyrdom of the 21 faithful Coptic Christians who were cruelly murdered by militant extremists.

Our sorrow is found in our shared grief with the families and friends of those whose lives were brutally cut down by terrorists; it is a sorrow that is felt in the hearts of all Christians, and indeed, of all who would consider themselves human beings. Nevertheless, it is a sorrow that does not bring us to despair because it is illumined by hope.

Our hope is found in the victory of Jesus Christ, manifested by His glorious resurrection, by which He overcame the two fiercest enemies of human life and dignity: death and sin, as Saint Nikolai of Zhicha notes.  Our Lord says, “In the world ye shall have tribulation: but be of good cheer, I have overcome the world” [John 16:33].

Let us, who stand fast in our faith in Christ and His eternal victory, remember that He alone has trampled on death by His own voluntary death.  Let us, who are filled with the hope of the resurrection, give glory to God for the martyric witness of the 21 souls who now witness to this victory.  And let us, who each struggle in our own way to remain faithful to God, give example in our own lives of those things which we hold dear—Peace, rather than violence; love, rather than hate; and forgiveness, rather than revenge.

On behalf of the Holy Synod of Bishops of the Orthodox Church in America and on behalf of the clergy and laity of our Church, I express to you and the entire Coptic Orthodox community our love, sympathy and condolences.  I have requested the faithful of the Orthodox Church in America to offer commemorations for the souls of those who have been murdered in Libya and to offer prayers for the Coptic Church and for the Egyptian nation.

This evening, let all of us offer our prayers for the Egyptian nation and the world-wide Coptic community; let us offer our prayers that we may enter a new time of tolerance and religious peace in Egypt and in the entire region of the Middle East. Let us ask the Lord Jesus Christ to have mercy upon us and upon His whole world.

Most viewed articles
Of Boasting and Modesty96
His Holiness Patriarch Kirill Contracted the Coronavirus93
4th Plenary Session between ROC and Coptic Church Held73
What Does the Cross Mean for us Today?17
Most popular authors
Pravmir.com team164
Archpriest Basil Ross Aden96
Priest Robert Miclean17