Source: The Christian Post
Stoyan Zaimov | 12 June 2017
The children of the 21 Coptic Christians beheaded by the Islamic State terror group in Libya back in February 2015 have said that they are "proud" of the courage their fathers showed the world by refusing to renounce their faith. 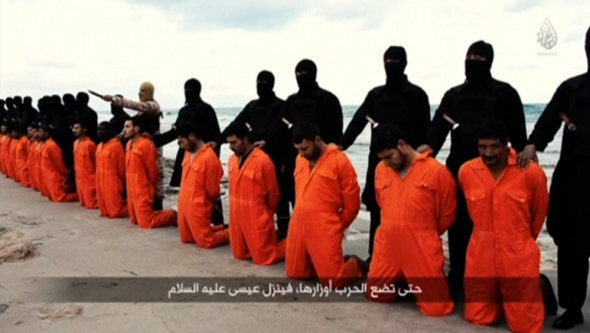 Jim Daly, president of Focus on the Family, which has been assisting the families of the murdered men in Egypt, said in an update at the end of last week that the children of the victims have been emboldened by their fathers’ sacrifice.

“The great news about the families of the martyrs of Libya is that even after more than two years they still live in the condolences of the Holy Spirit and they stick to their faith that their martyrs showed to the whole world; how the real Christian should live and die for the glory of Christ,” the Focus on the Family Middle East team reported.

“While we have been visiting the families regularly we met with some of the wives of the martyrs and asked them about their kids and how they live right now, a common answer was, ‘Our kids in their new nice private school have been so proud of their fathers among their friends and they have worked hard to match with studying the new curriculums to stay up to that new level of education.'”

Also, the relatives of the 21 beheaded Copts have been visiting and providing comfort to the Coptic families who have lost loved ones due to separate terrorist attacks in Cairo, Tanta, Alexandria, and the most recent bus slaughter in Minya this year.

The families have apparently been sharing among each other “how God has been faithful and strengthened them in such tough painful experience.”

Copts have suffered terribly at the hands of IS radicals on a number of occasions, and the extremists have vowed to continue killing Christians.

The video of the beheading of the 21 Copts in February 2015 was titled “A Message Signed With Blood to the Nation of the Cross,” but despite the horrific actions of the jihadists, the minority Coptic community in Egypt has been emboldened by the example the 21 men set in the video in their refusal to deny Christ.

As International Christian Concern reported at the two-year anniversary of the beheadings back in February, relatives of the men, who were kidnapped in separate incidents in Libya throughout December 2014 and January 2015, have been honoring the memories of their loved ones.

One widow said at the time that her husband “kept the faith, and was martyred in the name of Christ. His faith was very strong. I’m proud of him. He has lifted our heads up and honored us and all the Christians.”

Another family member commented, “I’m very happy that my brother is in Heaven with Jesus now. I loved my brother when he was alive on the earth, but now I love him more than before. He was martyred in the name of Jesus Christ.”

Coptic Orthodox Patriarch Tawadros II officially registered the 21 Copts in the book of martyrs in 2016 because they were killed specifically for their Christian faith.

Bishop Amba Angaelos, general bishop of the Coptic Orthodox Church, said that the tragedy has brought people together.

“These men paid the ultimate price, but gave us a cause to advocate for all those persecuted; they also showed us that there was a level of evil that we must all stand in solidarity against, and a level of courage, faithfulness and defiance that we must all aspire to,” Angaelos said about the Copts.