Source: Catholic Herald
The names of the martyrs will be entered into the Church's calendar, Pope Tawadros II has announced
Natalya Mihailova | 23 February 2015 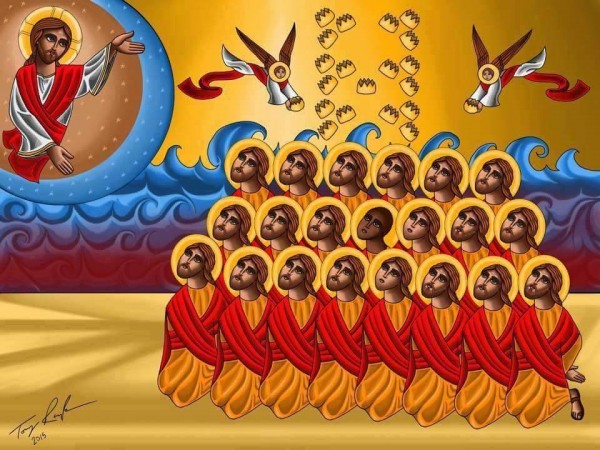 The Coptic Church has announced that the 21 Egyptian Coptic Christians killed by ISIS terrorists in Libya will be commemorated in its calendar.

The names of the martyrs will be entered into the Coptic Synaxarium, the Coptic Church’s leader Pope Tawadros II said. This procedure is similar to canonisation in the Latin Church.

According to terrasanta.net, the martyrdom of the 21 Christians will be commemorated on the 8th Amshir of the Coptic calendar, or February 15 of the Gregorian calendar. The commemoration falls on the feast day of the Presentation of Jesus at the Temple.

A group claiming loyalty to ISIS released a video last Sunday showing the beheading of 21 Coptic Christians who were taken hostage in Libya several weeks ago.

The Coptic Christians were kidnapped in Sirte in eastern Libya in separate incidents in December and January.

Last week, Pope Francis prayed for God to welcome the 21 Coptic Christians as martyrs since they had their “throats slit for the sole reason of being Christians.”

“The Lord welcome them as martyrs, for their families, for my brother [Coptic Pope] Tawadros, who is suffering greatly,” he said.