More problematic is the fact that Orthodox Christians do so little reading of the Bible at home (there are exceptions, just enough to prove the rule). They have no idea of the context of a prescribed passage from the Epistles, to the point that the reading is little more than liturgical trappings, devoid of meaning other than as a long and cumbersome way into the Gospel.
Archpriest John Breck | 08 April 2011 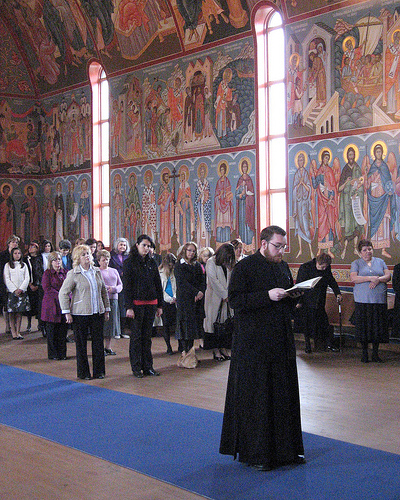 Reading of the Epistles

People will persist in dysfunctional patterns of behavior simply because they’re familiar. A woman who divorces an abusive alcoholic husband will be very likely later on to marry someone with a similar addiction. The “good ol’ boys” will continue to tie one on Saturday nights, even though the Sunday morning hangover is inevitably excruciating. A parishioner (only the Orthodox are guilty of this, it seems) who habitually arrives at the Sunday Liturgy after the Lesser Entrance and still wants to receive communion will respond to the priest’s protests, “But we’ve always done it that way, Father!”

Examples like this are not too far removed from a form of “liturgical dysfunction” that many of us complain about and yet do nothing to change. (“Change?”) I’m referring particularly to the way we read the Epistle at the Divine Liturgy. From a technical point of view there’s a very real problem posed by Readers who insist on displaying their vocal talents over a range of one or more octaves, with a muffled delivery that makes understanding what is being read almost impossible.

More troubling, though, is the fact that the lectionary was produced under monastic influence, which presupposed continuous daily readings. Those who devoted themselves to this discipline were familiar with the context of any given passage, and many of them, especially monks, knew the reading by heart. This is hardly ever the case today. In the first place, we have lost the habit of memorizing lengthy passages, whether of Scripture or of secular writings (a century ago school children committed to memory large numbers of poems and passages of classical literature; today most of those texts go entirely unread). More problematic is the fact that Orthodox Christians do so little reading of the Bible at home (there are exceptions, just enough to prove the rule). They have no idea of the context of a prescribed passage from the Epistles, to the point that the reading is little more than liturgical trappings, devoid of meaning other than as a long and cumbersome way into the Gospel.

This is a problem not only with rare and obscure passages (e.g., Col 2:16-23, or 2 Cor 3:7-11, or the Epistle of Jude). It also concerns readings that should guide us through the period of Great Lent and other times of special importance throughout the liturgical year. During Lent, for example, we read much of the Epistle to the Hebrews. The very heart of that writing is the passage 9:11-14, read this year (together with Gal 3:23-29) on March 21, to mark the commemoration of St Mary of Egypt. It is a magnificent passage that recounts the way Christ fulfilled Old Testament sacrificial rituals by offering himself to “purify [our] conscience from dead works to serve the living God.” To those who are thoroughly familiar with the theology of Hebrews, this passage is pivotal, marking the transition from promise to fulfillment, from the insufficient worship under the Old Covenant to the ministry of Christ, the mediator of a New Covenant under which alone salvation is possible.

To the average parishioner, however, references to “high priest of the good things to come,” to a “more perfect tent,” to “goats and calves,” and even to Christ’s “own blood,” are on the whole incomprehensible. This is especially true when the passage is chanted, often unintelligibly, and presented without context or introduction. Taking at random passages from the Epistles prescribed for the Divine Liturgy, in an effort to fathom their meaning even at a quiet sitting with time to reflect on the words, one can easily understand why the vast majority of our priests preach mostly, if not exclusively, on the Gospel.

We are all aware of this problem, and we occasionally talk about it in the parish hall, the pastor’s office, or over lunch. We recognize that a major portion of the Biblical witness is inaccessible to lay people who lack theological training. Yet we continue in the same (dysfunctional) way to deliver prescribed passages to the congregation, knowing full well that it serves little or no good purpose.

It is a sad state of affairs that a passage such as 1 Cor 13 (beginning only at verse 4!) is lost in the middle of the week, read this year on Wednesday, July 21. Or that we never hear at the Divine Liturgy large sections of the Gospel that include Jesus’ teaching. Certainly our lectionary needs to be revised, to take into account the fact that most of the faithful are simply not accustomed to a regular reading of Holy Scripture. We may feel that any such change would be giving in to the bad habits of our time. But the reason we read and proclaim the Word of God in our liturgical services is to serve the pastoral needs of the people. It would be wrong, of course, to “accommodate” in such a way as to jeopardize the integrity of those services. It would be equally wrong, though, to persist in practices that actually deprive the faithful of the nurture that Scripture uniquely provides.

To improve things, a first step would be for a biblical commission – composed of lay men and women as well as clergy, together with theologians trained for the task – to devote itself seriously, with episcopal blessing, to a revision of the Orthodox lectionary. No radical changes are needed; just a readjusting of the various prescribed readings, in terms of length and content, to provide more context for difficult passages and a broader selection of Gospel teachings. It would also help to train our Readers in general to minimize vocal exploits and to enunciate the scriptural message slowly and reverently. In addition, we should encourage our priests, during their seminary training and in their pastoral service, to preach more frequently and effectively on the Epistle readings. Bible study groups could also focus less on Gospel “stories” and more on the intricate development of spiritual themes the apostolic writers have left us in those boundlessly rich documents, which are true “treasures of the faith.”

Once again, this is a major problem for the pastoral and spiritual growth of the Church’s faithful. If it receives so little attention, it is because we have become so used to doing things as usual that we barely notice that significant portions of what we hear in church are unintelligible. Much depends on the care and ability of the Reader. But much, too, represents a definite form of liturgical dysfunction, hard to change, simply because “we’ve always done it that way.”

Source: The Orthodox Church in America