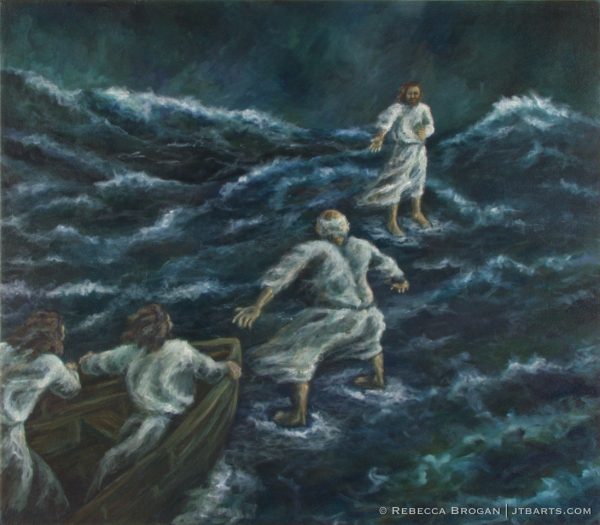 Jesus wanted to be alone to pray. He had taken to the hills for quiet and solitude. Meanwhile the disciples were in a boat crossing to the other side of lake Galilee. As they sailed, the winds and waves kicked up. A squall broke out. In the midst of the storm, Jesus came to the disciples walking on the water. As they were frightened, He said to them “Take heart, it is I [Ego eimi]; have no fear!”

The Apostle Peter, known for his daring, seized the moment. “Lord, if it is You,” he said, “bid me come to You on the water.” “Come!” was the Lord’s reply. Peter stepped out of the boat and began to walk on the water toward Jesus. But looking at the waves and the winds instead of at Jesus, he lost his focus and began to sink. “Lord, save me!” he yelled. Jesus reached out with His hand, pulled him out of the water and brought him back into the boat. The stormed calmed. The disciples all in amazement confessed to Jesus: “Truly, You are the Son of God!”

If this episode was part of a “star-wars” film we would probably accept it and be entertained by its drama. But could such miracles occur for real? Could Jesus and then Peter for a few steps have really walked on water? Well, let’s not forget the mysteries and astonishing powers in creation. Astronomers with new instruments have discovered in recent decades billions of new galaxies travelling at dizzying speeds from each other, and also phenomena within them that absolutely astound the human mind.

I love watching astronomy documentaries. I am amazed contemplating the immense distances between stars and even more so between galaxies, the notions of massive black holes swirling around each other, the birth of new stars bursting into light, and a phenomenon called “particle entanglement.” Particle entanglement involves two related sub-atomic particles which then can be separated long distances, even millions of miles, and still interact instantly, seemingly faster than the speed of light. Einstein called it “spooky action at a distance.” But scientists are already using particle entanglement in computing technologies and cryptography, with amazing prospects for the future.

Dazed by such phenomena, I say to myself “surely all the miracles of the Bible are possible!” including walking on the water, given God’s power and the forces inherent in creation. However, I also hasten to say that miracles in the Bible occur for a purpose and they carry symbolic value. Miracles in the Bible are never intended to eliminate faith. They are narrated from the standpoint of faith and are to be interpreted from the standpoint of faith. The greatest miracle is Christ Himself in His truth, goodness, beauty.

The story of St. Peter trying to walk on water suggests the trials and perils of life and conjures up fears of danger and harm. Jesus comes as One who controls the elements of nature and is victor over the powers of chaos and death. He comes to rescue the band of disciples, symbolizing the Church, sometimes tossed to and fro in the world, and bring them under His protection and care. In history all of us are in the ark of the Church, with Christ at the wheel, guiding us safely on our journey to God’s kingdom.

St. Peter had moments of crisis in his life that were real and life-changing. Among them was the bitter experience of denying Christ three times in one evening. Peter had the courage to be near Jesus at the first stage of the trial. But when he was asked, “Are you one of His disciples?” he denied it three times, saying, “I don’t know the man!” The rooster crowed. Jesus turned and looked at Peter (Luke 22:61). Their eyes must have met. Ashamed and crushed, Peter ran out and wept bitterly for his betrayal of Christ.

The Lord did not abandon Peter to his misery. He knew Peter’s heart. Any human can fall. After the resurrection Christ took the initiative to find Peter, forgive him, and restore him to leadership in the early Church. “Do you love me, Peter?” the Lord asked him three times. “Yes Lord, You know that I love you!” Peter replied. And so the three words of denial were overcome and healed by three words of love.

Moments of testing, moments of trial and crisis, moments of darkness and despair are almost inevitable in every person’s life. If you go by the news cycle, you find yourself walking in a field of sludge. Thank God that things are usually far more ordinary and peaceful when we consider our relations with our neighbors, our family members, our friends.

Nevertheless, all of us have experienced real tests of faith. All of us have St. Peter moments of crisis. We may not deny Christ through actual words but we do so through actions and loss of faith in Him. There have been moments in my own life when Christ seemed absent, a time of physical and mental crisis in which prayer seemed but empty words spoken to darkness. My own St. Peter story of crisis I have rarely or never really mentioned in a sermon. But perhaps today’s Gospel reading permits it as a confession of soul.

At a time of turbulence in the life of the Church, I thought I could “walk on water” by speaking and writing the truth in love. The Church authorities thought differently. I was dismissed from my teaching post together with others because we had sided with the victim in a sexual harassment case. The dismissal created a furor in the Church. The dismissal was not only plainly wrong but also contrary to the evidence gathered then and later. Truth and justice did not seem to count for the Church! One bishop, blessed be his memory, even threatened me orally that I would lose my priesthood if I took the case to the public courts!

Thank God that other bishops, and many priests and countless lay people were supportive and encouraging in a seemingly endless personal trial. The public embarrassment of dismissal after thirty years of teaching was overwhelming. Of equal grief was my widowed mother’s pain seeing her son, given to the Church and being rejected by the Church. But the Lord had His own and better plans. Christ, the helmsman, guided the Church to find her way again in a long period of peace, restoration and healing, though some may still feel the wounds of those times. Important lessons for the historical road of the Church still remain for reflection.

What to do in times of crisis? Try to keep some sort of schedule and do some sort of useful work for the sake of balance and direction. Look to family, friends and co-workers for connection and support. Recall the lives of saints such as Athanasius and John Chrysostom who suffered hardships and persecution. Keep doing the right thing in the light of any strength of faith you still have. Do not surrender the soul to anger, hostility, or depression.

Above all, do not take your eyes off the Lord. Never abandon seeking the presence of Christ, knowing that He never abandons you. Rather He is near you, closer to you than you can ever imagine, and ready to reach out and pull you out of churning waters.

An icon of Christ rescuing St. Peter from drowning has a prominent place in my office. The sea is raging. The boat with the disciples in it is tossed up and down. Peter is sinking. But Christ serenely reaches out and holds his hand safely. Christ is pulling St. Peter out of the water. That icon means a lot to me.

A verse from the Psalms reads “Lord, stretch out your hand from on high, set me free and rescue me from the mighty waters, from the hands of adversaries.” (Psalm 147:7). The icon depicts a miracle. Christ Himself is the supreme miracle that God offers to us. Christ the Lord in His divine presence and beauty, His goodness and love for you and me, and His promise, “Behold, I will be with you always to the end of the age.” (Mat. 28:20) Amen.