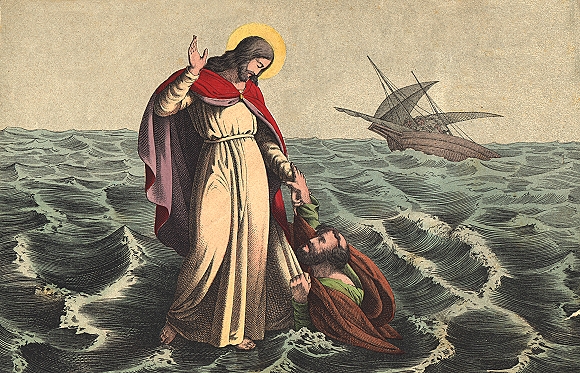 And straightway Jesus constrained His disciples to get into a ship, and to go before Him unto the other side, while He sent the multitudes away. And when He had sent the multitudes away, He went up into a mountain apart to pray: and when the evening was come, He was there alone. But the ship was now in the midst of the sea, tossed with waves: for the wind was contrary. And in the fourth watch of the night Jesus went unto them, walking on the sea. And when the disciples saw Him walking on the sea, they were troubled, saying, It is a spirit: and they cried out for fear. But straightaway Jesus spoke unto them, saying, Be of good cheer: it is I, be not afraid. And Peter answered Him and said, Lord if it be Thou, bid me come unto thee on the water. And he said, Come. And when Peter was come down out of the ship, he walked on the water, to go to Jesus. But when he saw the wind boisterous, he was afraid: and beginning to sink, he cried, saying, Lord, save me. And immediately Jesus stretched forth his hand, and caught him, and said unto him, O thou of little faith, wherefore didst thou doubt? And when they were come into the ship, the wind ceased. Then they that were in the ship came and worshipped Him, saying, Of a truth Thou art the Son of God. And when they were gone over, they came into the land of Gennesaret (Matthew 14:22-34). 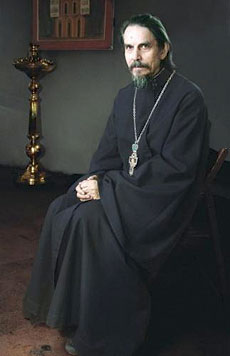 Following the miraculous multiplication of the loaves, the Lord commanded His disciples to enter into a ship and go before Him unto the other side of the sea, while He dismissed the multitudes.

Having dismissed the people, He ascends a mountain to pray in solitude. He prays all evening and all night, until the fourth watch of the night, while they were sailing. They were in the middle of the sea when a storm began. At the beginning of our journey there might be perfect weather, when suddenly a storm catches up with us. As they say, after a long lull, expect a storm. Such is life. Such is the way of the Church.

Christ’s disciples were where Christ had sent them, but they still did not avoid the storm. There should be nothing surprising to Christ’s disciples when they meet with storms in the course of their ministry. And there is nothing strange in the fact that Christ sends them unto the open sea, knowing in advance what to expect. The Lord desires to show them even more marvelous grace than was the case with the five loaves, to introduce them even more deeply into the mystery of His Cross.

It was a great trial for Christ’s disciples to find themselves alone, without their Lord, amidst the storm. Not like before, when they were sailing in the boat and He was asleep at the stern (Mark 4:38). This is what the Lord sends us, leading us gradually from small difficulties to ever larger ones, that we may learn to live by faith.

Although the wind was contrary and the ship was being tossed by the waves, they had received from the Lord the commandment to sail to the other side, and did not think of turning back. But it was hard rowing to go where the Lord had said. Although troubles and difficulties increase – the Holy Church tells us today – nothing should force us to turn aside from our path. And we see Christ’s love, His concern for His Church. Extreme circumstances experienced by the people of God are God’s time to visit His Church and to appear to it.

Christ walks on the water, revealing His sovereign power over all the elements. We need not ask how He does this. It is enough to see His Divine power. Christ acts as He wishes in order to save us.

We know how weak our faith can be. And the disciples, seeing Him walking on the water, cried out from fear. “It is a spirit,” they said, while they should have said: “It is the Lord” – as the Apostle John the Theologian says afterward, when he sees the Risen Christ standing on the shore.

The Lord approaches us to save us from troubles, but we do not recognize Him, fearing not only troubles, but even His approach. The greatest danger of all external troubles consists in inner turmoil and fear, when we begin to fear everything. This is a sign that, having forgotten about God, we give place to the Devil in our hearts.

We see how fearlessly the Lord walks on the waters while the storm is raging. He is calm; He is full of God’s peace; He is full of faith – that is, in the trust of the love of the Heavenly Father. This is His path to the Cross; He is going out to meet the danger that threatens us. He goes to challenge death, in order to allow us to live and to redeem us from all fear.

Peter went to be where the Lord was, on the water. But seeing the strong wind, he was frightened and, beginning to sink, he cried out: “Lord, save me!” From fear Peter was plunged into death, while fear came to him from doubting in faith. Such takes place with each one of us, when we face danger. But as soon as we cry out to Him, the Lord immediately extends to us His saving hand, calming the storm, and taming the forces of death. He shows us the miracle of the Resurrection, again and again teaching us faith and trust in God’s Providence and the victory of fear and despair.

How many times were we drowning in the sea of this life, but some invisible hand supported us and suddenly withdrew us from danger? And again we heard these words: “O thou of little faith, wherefore didst thou doubt?” Let us bring to mind the former benefactions of God, and in the future, in all danger, call upon the Name of God, and we shall be saved.

The Lord was slow to help for some time in order to test our faith, but now He hastens to save us from the greatest dangers, that we might better know Him and learn from Him His love. Only in love there is no fear, and perfect love drives out all fear (1 John 4:18). In short, He can calm any storm.

“It is I, be not afraid!” He does not call Himself by name; it is sufficient for him to say: “It is I,” because they know His voice, being His sheep. Only He can grant such peace and quiet. “It is I,” and then “be not afraid.” Do not fear Me now that you know that it is I. Christ cannot be fearful to those to whom He reveals Himself. The whole fear of eternal torment consists in being deprived of communion with Christ. The world languishes today from fear of what is coming upon the universe. But if people knew Christ, all fear would vanish at once. “It is I, and do not be afraid of the storms, winds, and waves raging in human history and in your personal life. Do not be afraid of them, for as long as I am with you. I am He Who ceaselessly labors for you and Who will not stand and watch as you perish.” Nothing, no storm, not death itself, should be fearful for those who have Christ with them.

We are going to Christ on the water of the sea of life, and Christ will not allow us to sink, nor for the world to absorb us. We will go upon the water as already participants of His Resurrection, and there will be no danger in this water, which is supported by the same hands that He stretched out on the Cross. No one can go to Christ if he is not strengthened by His power. And so long as our gaze, like Peter’s, will be directed towards Christ, towards His word and His power, we will pass over the abyss. But as soon as we lose sight even for a moment of Christ, and will only see the overflowing waves and wind – that which is going on in today’s world – we will realize that it is impossible to walk on water, fear will grip us, and we will start to sink.

But here, too, as soon as we call upon His help from the very depth of despair, we will understand why Christ is called the Savior. He comes to save us, when all is already hopeless. He is close to all who believe in Him – especially when they are drowning – at an arm’s length away. He does not turn away from us of little faith, but allows there to be storms, so that we would grow in faith, learning to walk with Him. And the saved, along with the Apostles and all the Church, will bring Him a person confession of gratitude and love, worshipping Him with the words: “Truly Thou art the Son of God.” 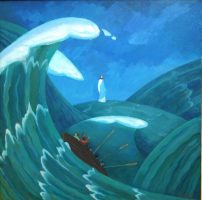 “We Are Walking on This Sea…
Metropolitan Anthony of Sourozh

Think, I am not an unbeliever, on the contrary, but I believe passionately in the communion…