Mary the Theotokos Full of Grace 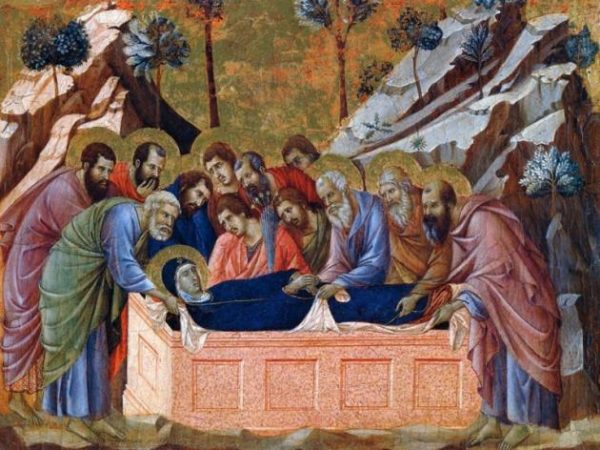 Today Orthodox Christians celebrate one of the greatest feasts on the Orthodox calendar. We commemorate the death and burial of the Virgin Mary. We call it Koimêsis, “Falling Asleep” or “Dormition” of the Theotokos. We call it also “Assumption” according to a tradition that not only the soul of the Theotokos but her most pure body, too, was taken up to heaven. All these are titles and names of many local Orthodox parishes, including our own here in Dracut, MA.

Today we celebrate Mary’s death and passage to heaven, but also her person and her entire life. May the presence, prayers and protection of the Holy Theotokos guide our beloved parish, our families, the whole Church and all Christians.

Why is Mary so important? The Scriptures give us a perspective on Mary’s unique role in salvation as the mother of Christ. Christ and Mary are the most significant figures in our New Testament theologically. In our Old Testament we have Adam and Eve as their parallels. Adam and Eve are the symbolic ancestors of humanity, the two figures through whom God began the existence of all humans.

The four biblical figures, Christ and Mary, and Adam and Eve, are the pivots of the whole story of salvation. Each pair determined a different path for the destiny of humanity, one toward sin and darkness and the other toward grace and light. Adam and Eve by their disobedience to God’s commandment introduced sin into the world, and sin engendered all manner of evil, wickedness, misery and death. In contrast Christ and Mary were the “new” Adam and the “new” Eve who, by their obedience to God’s will reversed the fall of Adam and Eve, and opened the new era of salvation where grace, mercy, goodness and life prevail.

In the case of Eve, according to the biblical story in Genesis, an evil serpent came to speak to her. The serpent approached Eve to whisper words of temptation to her ear, a message that contained in it the seed of death. By her disobedience to God’s commandment, a drastic “no” to God’s plan for her, Eve started a process that brought disorder, conflict, corruption and mortality in human existence.

In the case of Mary an angel of the Lord, the Angel Gabriel, came to greet her. The Angel Gabriel approached Mary to salute her with news of great joy, the conception and birth of Christ. By her obedience to God’s call, her splendid “yes” to God’s plan for her, Mary started the beginning of the new era of grace and life through Chrit. Christ, being God, is Life. Mary, being the mother of Jesus, is the Mother of God and the Mother of Life, as she is often exalted in many hymns of the Church.

Mary’s part in our salvation is not only historical and theological. It is also very personal and intimate. She carried Jesus in her womb for nine months. As every mother knows she experienced all the signs of the growth of Jesus in her body, His stirring and kicking, the exciting and welcome signs of the wonders of a new life about to be born. After His birth Mary nursed Jesus as a baby and cared for Him through the years of youth. Later she followed Him in His adult life and mission, sharing His joys and sufferings to the very end at the foot of the cross and the resurrection.

Mary came to know and understand Son in ways so personal and so unique to a mother that no other person past or present could possibly match. As a faithful mother and a devoted follower of Christ she exemplified the virtues of faith, obedience, self-giving, joy, patience, strength in suffering, intercession, wisdom, holiness and love, all of which define the qualities of her spiritual motherhood as the Mother of the Church and the Mother of all Christians.

Mary’s relationship to Christ, her motherhood, was not only biological but also spiritual. She gave birth to Christ in the flesh from her own flesh, experiencing the miracle of birth and nursing Him as a baby. Her love for Jesus and her faith in His saving work enhanced the relationship into a deeply spiritual one. In the life of the Church, which proclaimed Mary as Theotokos, Birth-giver of God, on account of the Incarnation, the relationship was disclosed as deeply theological. All these aspects of Mary’s motherhood remain and abide into eternity.

Mary was a human being like us too. She had moments of doubt and questions not only at the time of her conception, but also later during the life of Jesus as He gradually revealed the fullness of His identity and glory. In particular the Gospel of Mark tells how, early in Jesus’ ministry, Mary and other family members came to take Jesus home, not fully comprehending the magnitude of His work. Christ had been casting out demons and healing many people. He had created a public controversy regarding His actions and claims. Even his own family was for a time confused about what He was doing. They had come to find Him and bring Him home safely, thinking He had gone “besides himself” as Mark puts it. (Mark 3:21, 31-32).

From this episode we learn about the give and take in family relations. But there is an additional lesson. When Jesus was told that His mother and brothers were outside and were asking for Him, He said: “Who is my mother and my brothers?” And showing with a gesture the people listening to Him, He continued “Here are my mother and my brothers! Whoever does the will of God is my brother, and sister, and mother.” (Mark 3:33-34) Blood family is decisive for us in many respects. But there is also another family, the family of God, obeying and living by God’s will, which is just as important, or even more so, in the eyes of God.

Two weeks ago I read a piece by the columnist David Brooks entitled “How to Find Out Who You Are.” According to Brooks the worst answer is to tell people to look deep within, in order to find the “real you,” because some people find there is no “real you,” and they “just make up stuff about who they think they are.” A better way according to Brooks is to act like painters and artists who create by looking at and imitating nature. So also human beings ought to examine and imitate the desirable traits and lives of others, and so by trial and error they can create an understanding of self that is both coherent and satisfying.

I have a fuller answer, from the treasures of the Bible and the Orthodox tradition. Look at and imitate the traits and lives of the saints, especially Mary the Theotokos! She was the one who spoke the magnificent “yes” that helped direct humanity to its grace-filled destiny. Reflect on and  live by her attributes of faith, humble obedience, joy, patient suffering, goodness, purity of heart, holiness, and love. Live by prayer and worship as she did and expressed it in her song, the Magnificat, with the words “My soul magnifies the Lord, and my spirit rejoices in God my Savior.” (Luke 1:46-55)

Oh yes, and look deep inside of yourself too. For you are created in the image and likeness of God. You are a living icon of God, filled with all of God’s gifts and blessings by creation. As you practice the Christian virtues and are cleansed from the effects of sin by God’s grace, you will perceive an inner light that will guide you further in your life of faith. Look within, the saints teach, and you will find the treasures of God’s kingdom. “The kingdom of God is within you!” (Luke 17:20) Jesus said. Christ comes and makes His home in our soul (John 14:23). He knocks, and if we deign to open the door to Him from the inside, He will come and will eat with us and we with Him. (Rev. 3:20).

Rejoice in the festival of Mary, the holy Theotokos full of grace (kecharitômenê). May the most pure maiden from Nazareth, our Panaghia and holy Mother, now glorified in heaven, ever shine the grace and light of her Son upon us for health and salvation. It is to Him, the Lord Jesus, Christ and Savior of the world, the one thing “most needful” according to today’s Gospel, that we give all the worship and adoration to the ages of ages. Amen.