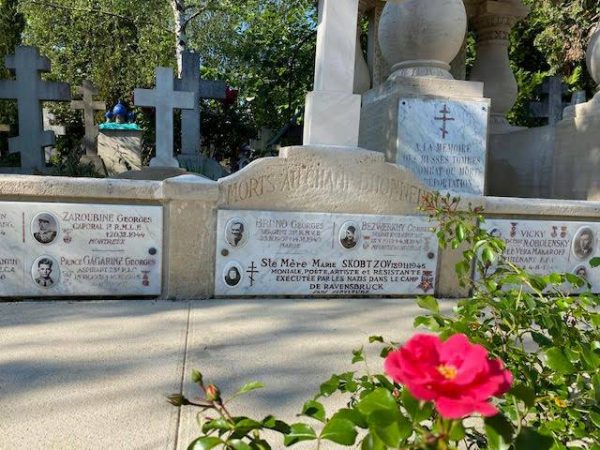 A memorial sign appeared at a famous cemetery of Sainte-Geneviève-des-Bois near Paris dedicated to Mother Maria (Skobtsova), a Russian nun and a member of the French Resistance movement, reports Konstantin Volkov, Director of the Russian Center for Science and Culture in Paris (RCSC) on his facebook page.

“Thanks to the efforts of Nikita Krivoshein and Ksenia Krivoshein, the memory of Mother Maria Skobtsova, who was martyred in the Nazi Ravensbruck camp, is forever preserved,” wrote Mr. Volkov.

The director of the RCSC stated that there is still no grave of Mother Maria at the Sainte-Geneviève-des-Bois Cemetery, where there is a famous memorial – Monument to Russian soldiers who died in the ranks of the French army.

“The construction and erection of the memorial sign became possible thanks to the Krovosheins, who took the initiative in creating it at their own expense. The project was supported by the Russian Embassy in France and the RCSC in Paris,” said Konstantin Volkov.

Many documentaries and films were made about Mother Maria, international conferences, exhibitions devoted to her memory take place, and memorial boards are installed. In 2016, a street was named after Mother Maria in Paris.

Mother Maria (Skobtsova) was born in Riga in 1891 and grew up on a family estate along the Black Sea. Her father’s death when she was fourteen was a devastating event that for a time led her to atheism, but gradually she found her way back to the Orthodox faith. As a young woman, she was the first female student at the St. Petersburg Theological Academy. In the same period she witnessed the Bolshevik coup and the civil war that followed. Like so many Russians, she fled for her life, finally reaching Paris, where she was among those who devoted themselves to serving fellow refugees, many of whom were now living in a state of destitution even worse than her own. At that time, she worked with the Student Christian Movement.

In 1943, Mother Maria was sent to Ravensbrück in Germany, where she endured for two years, an achievement in part explained by her long experience of ascetic life. “She was never downcast, never,” a fellow prisoner recalled. “She never complained…. She was on good terms with everyone. Anyone in the block, no matter who it was, knew her on equal terms. She was the kind of person who made no distinction between people [whether they] held extremely progressive political views [or had] religious beliefs radically different than her own. She allowed nothing of secondary importance to impede her contact with people.”

She died on Holy Saturday. The shellfire of the approaching Red Army could be heard in the distance. We are not certain of the details of her last day. According to one account, she was simply among the many selected for death that day. According to another, she took the place of another prisoner, a Jew. Jacqueline Pery wrote afterward: “It is very possible that [Mother Maria] took the place of a frantic companion. It would have been entirely in keeping with her generous life. In any case she offered herself consciously to the holocaust … thus assisting each one of us to accept the Cross…. She radiated the peace of God and communicated it to us.”

We now know Mother Maria as St. Maria of Paris. Her commemoration occurs on July 20.