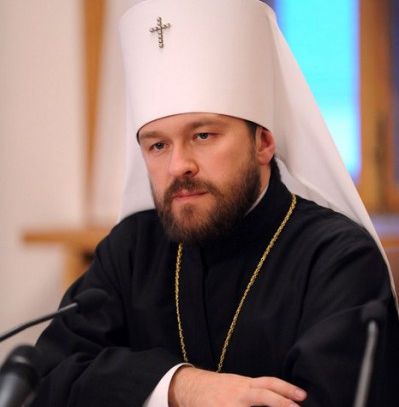 Metropolitan Hilarion, Chairman of the Department for External Church Relations of the Moscow Patriarchate, expressed his concern over the possibility of turning Hagia Sophia in Istanbul into a mosque.

“We are closely following with serious concerns the events surrounding the Hagia Sophia Cathedral. We are waiting for the official publication of the decision of the Supreme Court of Turkey, which, judging by the press reports, found that the status of Hagia Sophia, which is currently a museum, can be changed by a decree issued by the country’s president. We hope that the decision to turn the cathedral into a mosque will not be made,” the metropolitan told Interfax.

The metropolitan said Hagia Sophia “is the heritage of the entire humankind.” It was an Orthodox church for 1,000 years and then was made a mosque, but it received the status of a museum in 1934 according to a decision made by Turkey’s first President Kemal Ataturk.

Fragments of priceless mosaics with images of Christ, Our Lady, John the Baptist, Byzantine emperors and empresses have been preserved in the cathedral, he said. “What will happen to these mosaics if the church is turned into a mosque? Images are banned in Islam. Will they be knocked down, like most of the mosaics were knocked down after Constantinople was taken over in 1453? Or will they be covered with plaster again?” he said.

Metropolitan Hilarion said he is convinced that “any change in the current balances and long-term status quo can inflict heavy damage on the mutual understanding in the world, dialogue of civilizations and culture, inter-religious dialogue.” The building is not only a priceless world heritage site protected by UNESCO, which plays a unique role in world history, but also a place of sacral significance, he said.

The metropolitan does not agree with the Turkish officials who say that the future of the cathedral is an internal affairs of Turkey. “It’s hard to agree with that. Hagia Sophia is a world heritage site. It is not without reason that the talks about changing its status have shaken the whole world, and especially the Christian world. The church is devoted to Christ, Sophia the Wisdom of God is one of the names of Christ,” he said.

Metropolitan Hilarion also said Hagia Sophia played a special role in the history of ancient Rus. The ambassadors of Prince Vladimir came there and during services they did not know where they were, on earth or in heaven, he said. “The choice that the man who christened Rus made was predetermined in that church. That is one of the reasons why we cannot be indifferent to the future of this cathedral,” the metropolitan said.

The debate on the future of Hagia Sophia in Istanbul resumed after the Koran was read there on May 29, on the anniversary of the fall of Constantinople. A week, later, Turkish President Recep Tayyip Erdogan ordered studying the possibility of turning Hagia Sophia into a mosque. Justice Minister Abdulhamit Gul later said the cathedral should become a mosque again, and Foreign Minister Mevlut Cavusoglu also spoke in favor of that idea. Armenian Patriarch Sahak II suggested that Hagia Sophia should become a place of prayer for both Christians and Muslims. Representatives of Orthodox churches and high-ranking diplomats, including U.S. Secretary of State Mike Pompeo, spoke against turning Hagia Sophia into a mosque.

Hagia Sophia received the status of a museum in 1934 according to a decision made by Turkey’s first President Kemal Ataturk. The cathedral was put on the UNESCO World Heritage Site list in 1985. In the meantime, the Supreme Court of Turkey ruled on Thursday that the status of the cathedral could be revised by a presidential decree. The country’s State Council discussed the issue the same day. It will publish its resolution within 15 days.