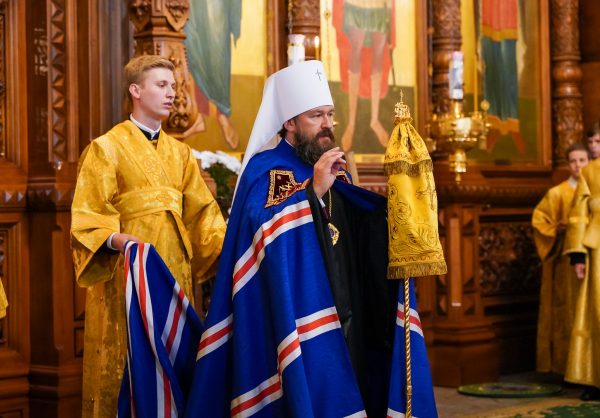 Requiem litany was said for the late lecturers of the seminary during the Liturgy, after which the graduates of the seminary and of the ‘Pokrov’ center greeted the archpastors and other concelebrants and expressed their gratitude for the celebration.

Metropolitan Georgy thanked the archpastors for common prayers and congratulated those present on the 300th anniversary of the theological school, mentioning that many graduates have left their mark in the life of the Nizhny Novgorod diocese and of the Russian Orthodox Church as a whole.

He said: ‘The troubled years had not spared our theological school, but it revived thirty years ago and since then has educated over one thousand pastors now serving in fifty-six regions of our country. The Church places special emphasis on the education and training of pastors.”

Metropolitan Hilarion read out the congratulatory message from His Holiness Patriarch Kirill of Moscow and All Russia on the occasion of the 300th anniversary of the Nizhny Novgorod theological seminary and addressed the faithful, saying in particular that every time he comes there he feels joy seeing that much is being done for the revival of the Church and the improvement of people’s life. He continued to say: “A theological school is meant not only to give knowledge, but to educate future pastors who should be worthy of their noble and responsible ministry. Education is very important today, as young people can be influenced by secular ideology and different challenges of our time. It is time to gather stones now – to revive spiritual life after years of persecution. The Church has ample opportunities for education, and our task is to educate new pastors making their souls shining with the flame kindled in the hearts of the apostles by our Lord Jesus Christ.”

The DECR chairman presented Metropolitan Georgy with a panagia, gave educational books of which he is a text writer to the seminary, and gave diplomas to the graduates. That same day he attended the festive evening celebration dedicated to the 300th anniversary of the seminary at the Jupiter Concert Hall. Also dedicated to the jubilee there was a photo exhibition presented in the foyer.

At the beginning of the event a hymn of the theological school composed by the graduates of 2021 was performed.

Metropolitan Hilarion addressed the audience with congratulations on the 300th anniversary and said: “We live in a favourable time. There is no comparison between our difficulties and those which previous generations of Christians had to endure. We have ample opportunities for developing religious education. I wish all the graduates and all of us never forget that Christ is the head of our Church. As we are beseeching the Lord to give us strength for our worthy ministry, He hears our prayers and responds. May He bless our Fatherland and our near and dear for many and good years.”

The guests saw the film about the three centuries of the seminary and enjoyed the performance of the metropolitan’s choir of the diocese, choir of the seminary and of the “Pokrov” center,  and the ‘Unity” choir from the Republic of Srpska, as well as of students of the Orthodox gymnasium named after St. Sergius of Radonezh and children from the kindergarten named after Sts Cyril and Maria, parents of St. Sergius.