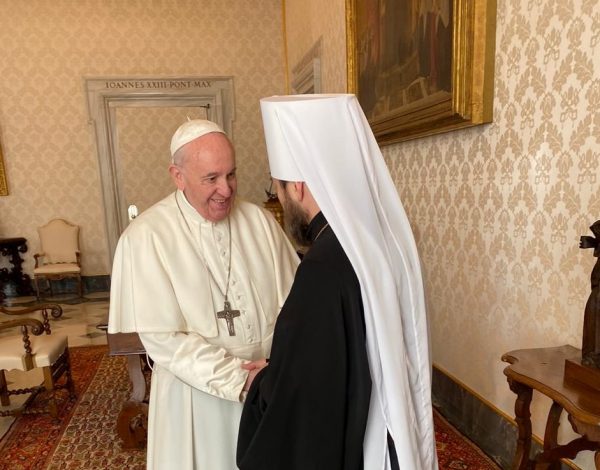 On 13th February 2020, at the Apostolic Palace in the Vatican, Metropolitan Hilarion of Volokolamsk, chairman of the Moscow Patriarchate’s Department for External Church Relations, met with Pope Francis.

The DECR chairman conveyed to the Pope of Rome greetings from His Holiness Patriarch Kirill of Moscow and All Russia. Pope Francis also conveyed his warm brotherly regards to the Primate of the Russian Orthodox Church.

Discussed at the meeting held in the atmosphere of mutual understanding and goodwill were topical issues pertaining to the relationships between the Moscow Patriarchate and the Roman Catholic Church. Metropolitan Hilarion told about the Conference on “The Saints – Signs and Seeds of Unity” that had taken place the day before at the Pontifical University of Saint Thomas Aquinas, marking the 4thanniversary of the historic meeting in Havana between Pope Francis and Patriarch Kirill. The head of the Roman Catholic Church and the Russian hierarch noted the uttermost importance for the bilateral relations of the bringing of the particle of the holy relics of St. Nicholas the Wonderworker from Bari to Russia in May-July 2017, in compliance with the agreement reached during the meeting in Havana. Metropolitan Hilarion presented to His Holiness a book-album telling about the journey of the miracle-working relics to Russia. The book was published in the Italian language by the Poznaniye Foundation in 2018.

The participants in the meeting expressed their satisfaction at the fruitful development of cooperation between the two Churches within the framework of the Joint Working Group established for that purpose. For instance, in recent years the Summer Institutes project has shown considerable promise, providing an opportunity to clergymen and students from the Roman Catholic Church and the Moscow Patriarchate to undertake educational visits to Moscow and Rome respectively and learn more about the traditions and present-day life of the two Churches.

Metropolitan Hilarion informed the Pope about the results of the latest session of the Joint Working Group held at the Pontifical Council for Promoting Christian Unity on 12th February. By including social issues in its agenda the Working Group broadened the scope of cooperation between the two Churches, which is of great importance for the implementation of joint projects in rendering humanitarian aid to the population of Syria affected by the war in the country.

The DECR chairman devoted particular attention to the project of rendering medical aid to the Syrian children injured during the hostilities in Syria, and thanked the Kirche in Not Catholic Charitable Foundation for taking part in this project.

At the conclusion of the meeting, Metropolitan Hilarion presented to His Holiness members of the delegation of the Russian Orthodox Church who had arrived in Rome on the occasion of the 4thanniversary of the Havana meeting: Archimandrite Philaret (Bulekov), DECR vice-chairman; Archpriest Leonid Kalinin, chairman of the Expert Council for Church Art, Architecture and Restoration, member of the Patriarchal Council for Culture; Rev. Alexander Aleshin, vice-chairman of the Synodal Department for Church Charity and Social Ministry; Archpriest Kirill Kaleda, rector of the Church of the New Martyrs and Confessors of the Russian Church in Butovo, Moscow; Hieromonk Ioann (Kopeykin), executive director of the Poznaniye Foundation; Hieromonk Stefan (Igumnov), DECR secretary for inter-Christian relations; and Senior Subdeacon Vyacheslav Li.