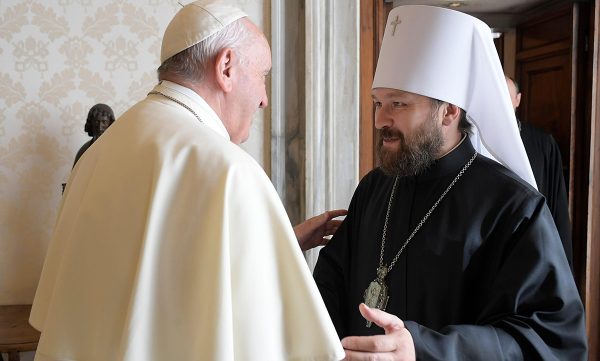 On 19 October 2018, Metropolitan Hilarion of Volokolamsk, chairman of the Moscow Patriarchate’s Department for External Church Relations (DECR), met with Pope Francis at the Apostolic Palace in Vatican.

Discussed during the meeting held in the atmosphere of mutual understanding and amiability were topical issues pertaining to relations between the Moscow Patriarchate and the Roman Catholic Church. Metropolitan Hilarion shared his good impressions of the presentations he heard at the plenary session of the Synod and told Pope Francis about his working visit to Portugal last September and his meetings with Cardinal Manuel Clemente, Patriarch of Lisbon, and other high representative of the Roman Catholic Church in Portugal. These meetings have shown the high level of mutual understanding of Orthodox and Catholics of the major problems of our time.

Pope Francis and Metropolitan Hilarion noted with satisfaction the fruitful development of cultural cooperation and the work of the specially established joint group. The Summer institute has proved to be a perspective project of exchange of priests and students of theology for acquaintance with traditions and modern life of the Roman Catholic and Russian Orthodox Churches. This project looks important in the context of the Assembly of the Synod being held in the Vatican on the theme “Young people, the faith and vocational discernment.”

Special attention was paid to the church situation in Ukraine. Metropolitan Hilarion briefed Pope Francis on the decisions taken at the session of the Holy Synod of the Russian Orthodox Church held in Minsk on October 15 pertaining to the uncanonical actions of the Patriarchate of Constantinople, explained the position of the Moscow Patriarchate and presented the statement adopted in Minsk.

Patriarch Kirill is strongly against the participation of the Church in political life. His Holiness said this at…

The Kingdom of Heaven exceeds the scale of space, showing the greatness of the eternal future life, His…