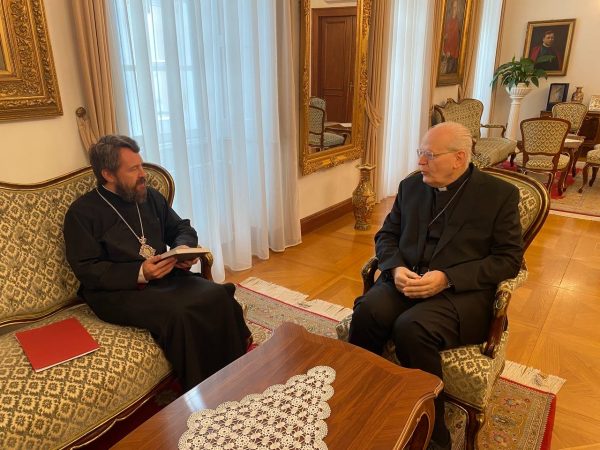 On June 1-3, Metropolitan Hilarion of Volokolamsk, Chairman of the Department for External Church Relations of the Moscow Patriarchate, with the blessing of His Holiness Kirill, Patriarch of Moscow and All Russia, visited Hungary.

On June 2, the DECR Chairman met with Cardinal Péter Erdő, Archbishop of Esztergom–Budapest. In their talk, they dealt with a wide range of issues concerning the cooperation between the Russian Orthodox Church and the Roman Catholic Church at the present stage. After the conversation, Metropolitan Hilarion present the cardinal with the Hungarian version of his book Catechesis. In his turn, the head of the Archdiocese of Esztergom–Budapest presented his guest from the Russian Orthodox Church with the papers of the 52nd Eucharistic Congress of the Catholic Church, which took place in 2021 and at which the DECR Chairman presented a paper on the Orthodox understanding of the Eucharist.

On the same day, Metropolitan Hilarion met with the Deputy Prime Minister of the Hungarian government, Mr. Zsolt Semjén. The DECR Chairman expressed gratitude to Hungary on behalf of the Russian Orthodox Church for the country’s firm position on the inadmissibility of including His Holiness Patriarch Kirill of Moscow and All Russia in the EU sanction list. As Metropolitan Hilarion stressed, in an epoch of political crisis, the voice of the Church should not be artificially suppressed. They discussed a number of issues of mutual concern.

On the same day, the Extraordinary and Plenipotentiary Ambassador of the Russian Federation, E. A. Stanislavov gave a dinner in honour of the Chairman of the Department for External Church Relations of the Moscow Patriarchate. Present at the dinner were Rev. Svyatoslav Bulakh, secretary of the Moscow Patriarchate Diocese of Hungary, and V. Li, an assistant to the DECR chairman.

Accompanied by Father Svyatoslav Bulakh, Metropolitan Hilarion visited the Cathedral of the Dormition in Budapest to see the progress made in the remedial and restoration work carried out with the support of the Hungarian Government.