Metropolitan Hilarion of Volokolamsk Begins His Working Visit to Hungary 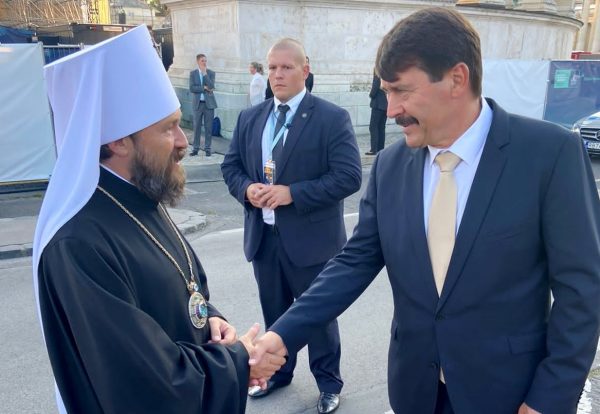 On September 4, 2021, with a blessing of His Holiness Patriarch Kirill of Moscow and All Russia, Metropolitan Hilarion of Volokolamsk, Chairman of the Moscow Patriarchate Department for External Church Relations (DECR), arrived in Hungary for a working visit.

At the airport in Budapest, His Eminence Hilarion was met by the Russian Federation ambassador in Hungary, Ye. A. Stanislavov, and Fr. Svyatoslav Bulakh, a cleric of the diocese of Budapest and Hungary.

On September 5, Metropolitan Hilarion attended the Divine Liturgy at the Dormition Church in Szentendre – the cathedral  church of the Budim diocese of the Serbian Orthodox Church.

On the same day, Metropolitan Hilarion attended the opening of the International Eucharistic Congress, an event held by the Roman Catholic Church in one of the European capital cities every four years.

In the evening of that day, Metropolitan Hilarion visited the Dormition Cathedral of the Moscow Patriarchate diocese of Hungary, in which Fr. Svyatoslav Bulakh showed him the progress made in the repair and restoration work carried out in the cathedral.

The program of the DECR chairman’s visit to Hungary includes his speech on the Orthodox understanding of the Eucharist to be delivered at the International Eucharistic Congress and meetings with ecclesiastical and political figures.