Source: OCA
Natalya Mihailova | 25 July 2015
Mission must be both internal and external, said His Beatitude, Metropolitan Onufry of Kyiv and All Ukraine during the formal banquet during the 18th All-American Council on Thursday evening, July 23, 2015. The Holy Spirit, he said, guides us in understanding that mission is “who we are and what we do” and challenges us to be good “examples of holiness.” 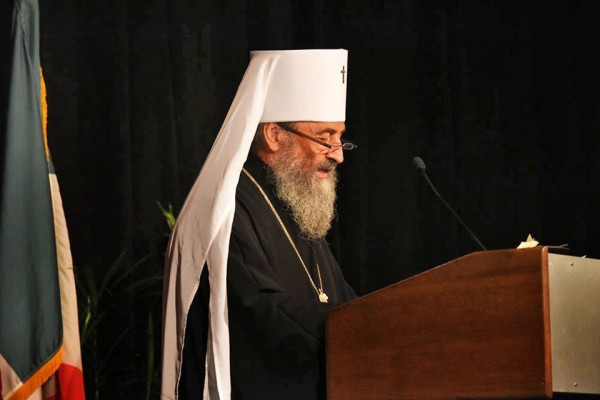 Metropolitan Onufry reflected on the ministry of Saint Tikhon, who had served as bishop and later archbishop in North America from 1897 through 1907.  He observed how, upon Saint Tikhon’s return to his homeland, it was clear that he had been influenced by his tenure in North America, especially with regard to his commitment to mission and outreach as well as collegiality within the life of the Church.  This, in turn, influenced his ministry during his last years—years of certain turmoil and persecution.

Metropolitan Onufry also addressed AAC delegates during the Plenary Session held earlier in the day.  He observed that in the Council he sees the result of the mission to North America “because, in the eyes of all who are present at this Council, I see Christ.  This is evidence of the good fruit brought fourth as a result of the mission of Saint Herman of Alaska as the Church faces current issues of missionary service in the world and, in particular, in North America and Ukraine.”

In his greetings to the assembly, Metropolitan Tikhon expressed his gratitude to all who participated in the AAC and contributed to the “wonderful events” that had taken place during the week.  He emphasized, that “we are each called to be apostles, to love God above all and our neighbor as our selves.”

Greetings were read from His Eminence, Archbishop Leo of Karelia and All Finland, who had been invited to the AAC but was unable to attend.  Archbishop Leo extended an invitation to Metropolitan Tikhon to visit the Church of Finland at a future date.

The hierarchs processed into the banquet hall as the assembly sang “O Lord, save Thy People,” Alexis Steffaro sang the national anthems of the United States, Canada and Mexico.  A color guard from Boy Scout Troop #287 held flags as the assembly said the Pledge of Allegiance.

With characteristic “Southern humor,” Archpriest Markus Burch, Chancellor of the Diocese of the South and banquet toastmaster, offered opening words of welcome, while Archimandrite Gerasim, Administrator of the Diocese of the South, reflected on the AAC theme in his remarks to the assembly.  He also recognized the many individuals who offered their time and talents to make the Council possible.  Banquet-goers also enjoyed a video presentation on the AAC theme, “How To Expand The Mission.”

During the banquet, the Order of Saint Innocent was awarded to Dr. Barbara Massoudi and Michaela Staskiewicz, who chaired the Local AAC Committee, for their exemplary work.  Gramoti were presented to Deacon Gabriel Aldridge and Gregory Carageorge in recognition of their dedicated labor in producing the video on the Council theme.

The AAC draws to a close on Friday, July 24, with the final Plenary Session.