Source: Reuters
Natalya Mihailova | 11 June 2015
Leading patriarchs of the Middle East meeting on Monday in Syria urged the world to help Christians survive in the region and said it was time to confront the hardline ideology of radical Islamists such as the Islamic State group. 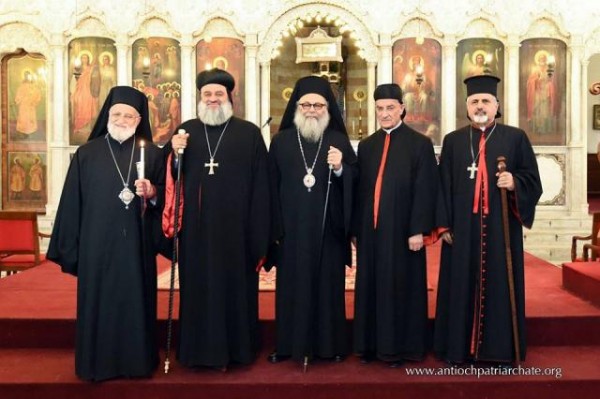 At a summit convened in Damascus, the heads of five major eastern Christian churches of Antioch said the ideological well springs of hardline Islamism must dried up by teaching “a culture of openness, peace and freedom of belief”.

“We call on everyone who claims to have an interest in our fate to help us to remain,” they said in an appeal to the international community. “We call on it to take its responsibility and to stop the wars in our land.”

The expansion of the Islamic State group in Iraq and Syria represents a big threat both to religious minorities and Muslims who do not share its radical vision of Islam. The ancient Christian community of Mosul fled Iraq last year when the jihadist group seized the city, fearing persecution.

Islamic State has this year abducted Christians in northeastern Syria, and staged a mass killing of Egyptian Coptic Christians in Libya.

“We are authentic (people) of this land, deeply rooted in its earth that was watered by the sweat of our fathers and grandfathers, and we confirm more than ever that we are staying,” their statement said.

(Reporting by Reuters TV in Damascus; Writing by Tom Perry in Beirut, editing by William Hardy)

Most viewed articles
Metropolitan Hilarion of Eastern America and New York to Be Buried in Jordanville on May 22175
Patriarch Kirill: The Peoples of Russia and Ukraine Have No Interest in the Conflict166
Communion restored between the Serbian Orthodox Church and the Macedonian Orthodox Church – Ohrid Archbishopric119
Metropolitan Hilarion of Eastern America and New York Reposes in the Lord118
What Do We Celebrate at Mid-Pentecost?102
Celebrating 100 Years with Paschal Joy64
Patriarch of Serbia to Concelebrate with Archbishop Stephen of Ohrid43
Family Life and Spiritual Warfare33
China’s Internet Clampdown Is Step Closer to ‘Cancelling Christianity’14
Concelebration of Divine Liturgy by the Serbian Patriarch and Archbishop of Ohrid in Belgrade (VIDEO)14
Most popular authors
Pravmir.com team635
Ioannis Foundoulis102
Priest Luke A. Veronis64
Archpriest Michael Gillis33
Donna Birrell14