Source: DECR
Natalya Mihailova | 20 March 2017
On March 16, 2017, His Holiness Patriarch Kirill of Moscow and All Russia met with President Igor Dodon of the Republic of Moldova, at the patriarchal residence in Peredelkino near Moscow. 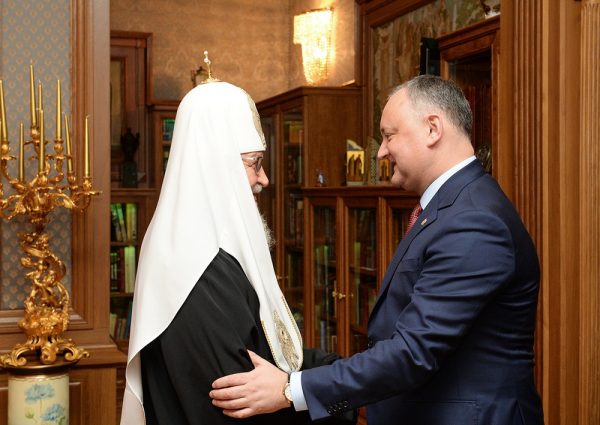 Present at the meeting were Metropolitan Hilarion of Volokolamsk, chairman of the Moscow Patriarchate department for external church relations (DECR), Archpriest Nikolay Balashov, a DECR vice-chairman, Mr. B. Legoida, head of the synodal department for the Church’s relations with society and mass media, and his deputy V. Kipshidze. The Moldovan side was represented by Ambassador Dumitru Bragish, Ms. Zinaida Grechanaya, chair of the Socialist Party faction in the Moldovan Parliament; Mr. Andrey Negutsa, the parliamentary foreign policy committee, and Mr. Ion Cheban, presidential adviser and press-secretary.

Welcoming Mr. Dodon, His Holiness Kirill congratulated him on his election to the post of the President of the Republic of Moldova, which took place in November 2016.

‘I would like to cordially congratulate you once again as by the will of the Moldovan people you have become the head of the state’, His Holiness said, ‘Perhaps the main reason for this victory is your principled determination to advocate the national interests of your country and people, the ordinary people of Moldova. People have shown trust in you, and today you head fraternal Moldova.

‘I know that you are an Orthodox man who openly declares his attitude to the Church, to the moral Christian principles. All this inspires hope in your success in your service of the Moldovan people and the state’.

His Holiness expressed the confidence that in difficult historical times – and today Europe once again is going through a difficult period – the political leaders ‘who stand on principled positions supported by a thousand-year tradition imbued in the genetic memory and consciousness of the people, will certainly succeed.

This fact, he said, is very important, as ‘with support from such world outlook it is possible to develop significant political and social programs’.

Mr. Dodon thanked His Holiness for the wishes and congratulation and expressed confidence that the current year has seen ‘a new stage in the Russian-Moldovan relations in which the strategic partnership is coming back.

‘You are aware of my position: I believe that without the Orthodox faith, without our traditions, Moldova has no future. Moldova needs relations of partnership with Russia; Moldova certainly needs preserving and consolidating our Orthodox Church. Yes, we are going through a very difficult period but with the faith, I believe, we will go through all this successfully’.

The president of Moldova also said that

‘after the meeting I had with the President of the Russian Federation in the beginning of this year there have been many positive changes in our bilateral relations. It can be felt by our citizens since concrete decisions have been made on migration problems. It is felt by our economic agents because there are concrete decisions concerning the export of our goods. All this inspires hope that we will come out of this difficult period in the nearest future’.

The president also thanked Patriarch Kirill for the attention he gives to the development of Orthodox life in Moldova.

‘Believe me, you are loved in our country; people watch your broadcasts and listen to your words very attentively’, he assured the patriarch; ‘You are expected with love and hope that in the nearest future you will be able to come to our country. You are expected on the both banks of the Dniester’.

‘Already 25 years have elapsed since the tragic events in Transdniestria’ he reminded to the patriarch, ‘A few weeks ago I came out with a proposal to establish a platform for national reconciliation. I am sure that the one Orthodox Church and faith can be a principal factor in promoting the unification of our country’, he stressed.

Welcoming this initiative, Patriarch Kirill noted that Orthodoxy in Moldova is the basis for people’s unity. ‘It is great that there is one and the same Church of the Moscow Patriarchate – the Moldavian Orthodox Church – on the either side of the Dniester. It is a very important factor that consolidates the society and the people. God grant that there may appear such political designs as to meet the aspirations of either part of our Moldovan flock’, the patriarch said in conclusion.